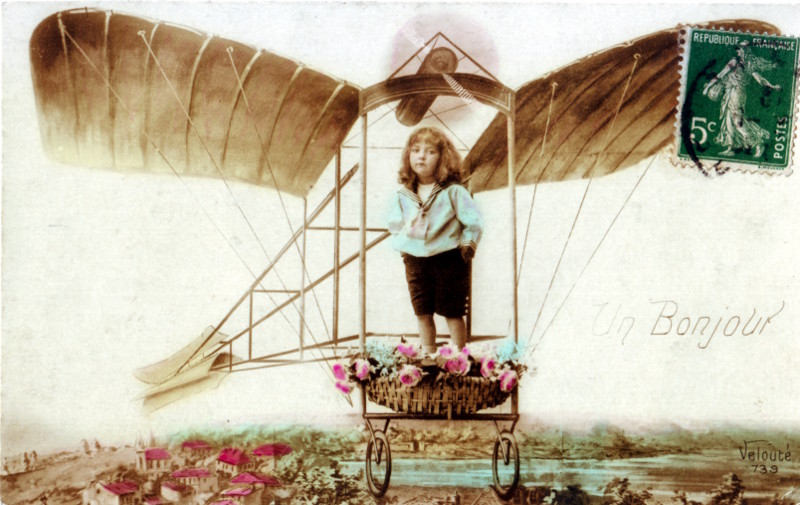 Another spectacular Roman market stall find this week. I'm no fan of flying, but perversely am fascinated by the early years of flight, so this celebration of pioneer aviation caught my eye right away. This beautiful, hand-tinted, real photograph vintage postcard features another stock favourite from the golden age of postcard production too – trick photography. I've actually seen versions of this particular card online with the same monoplane and landscape, but with different “pilots” - romantic couples, young men courting a sweetheart, and of course, as with our card here, children.

On 25 July 1909 French aviator, inventor and engineer Louis Blériot took up the challenge set by the British newspaper the Daily Mail and became the first person to fly across the English Channel in a heavier than air aircraft, scooping the £1000 prize! Blériot had built a series of mono and biplanes in previous years, but it was the Channel-crossing Blériot XI that history remembers.

The aircraft featured on this postcard is certainly very reminiscent of the Blériot monoplane, with its light, open framework, propeller, large bicycle wheels, and even the system of pulleys and cables on the wings. All that's missing is the cockpit – instead the androgynous little girl or boy stands in a basket of flowers with the greeting “Un Bonjour” printed to the right.

The postcard was published by Velouté, with the series number 739, and is postally used with the stamp on the front, rather than reverse of the card. Unfortunately the postmark is too blurred to be legible. The stamp - the 5c green “Sower” - was issued by the French Post Office in 1907, and with Blériot's historic flight drawing the world's attention to the monoplane two years later, I think it's safe to date this postcard sometime during the early 1910s.

It would be fun to try and identify the village and lake the plane is flying over...but I fear that might be an impossible task! Check out the footage of a modern air show flight of a 1909 Blériot XI
monoplane: click here to watch on YouTube.

What a wonderful world we live in, how sweet is it to be able to stop by a blog to discover an american poet who lives in Rome. Actually, I didn't realize last week, that you live there.

I think I already saw a card like this, not with Bleriot, but I will be more attentive, next time I go to Paris, I have two or three places to look for vintage books and reviews, you probably know it, along the quay La Seine, on both bank (rive gauche, rive droite) we have "Les bouquinistes" and sometimes you can find real treasure.

Maria said…
Thank you for the aviation trivia! :)

Christine H. said…
That's a very beautiful card! I am also a big fan of the early aviation postcards. The fantasy element makes them especially wonderful.
June 15, 2013 at 5:30 AM

Beth Niquette said…
What an absolutely lovely postcard. I thoroughly enjoyed reading your thoughts about flying, too. What a charming blod entry!

VioletSky said…
I'm going to have to start looking for versions of these trick photography postcards!
It can be both fun and frustrating trying to date some of these cards, can't it?!
June 17, 2013 at 8:06 PM