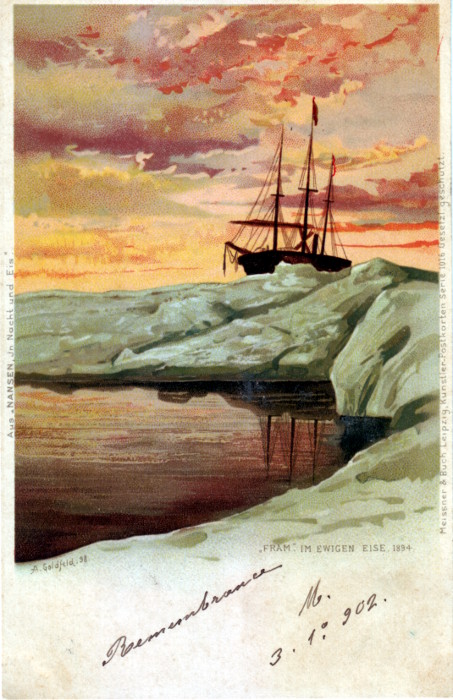 Summer has well and truly arrived here in Rome, with the solstice today bringing sizzling temperatures. So rather perversely I thought I'd share a vintage polar exploration postcard today for Postcard Friendship Friday! It's another stunning undivided back artist signed postcard printed using the chromolithographic method, published by Meissner & Buch. It was posted to Arenzano in Italy in 1902 and carries the handwritten date and message “Remembrance” on the front, although the postcard was actually part of a series issued several years earlier in 1898 to celebrate Norwegian explorer Fridtjof Nansen's 1893–1896 attempt to reach the geographical North Pole. Nansen had planned to harness the natural east–west current of the Arctic Ocean aboard the three masted schooner the Fram, by allowing her to freeze into the pack ice, and then drift towards the Pole. After 18 months Nansen tired of waiting and headed out on foot towards the Pole, falling short of his destination but setting a northern latitude record for the times. The Fram would later be used during another Norwegian explorer Roald Amundsen's successful South Pole expedition and is today preserved in the Fram Museum in Oslo. Nansen went onto to become a humanitarian and Nobel Peace Prize laureate.

Meissner & Buch were prolific publishers of extremely fine quality postcards from 1876 through to 1914, operating in Leipzig, Germany (the heart of the postcard industry prior to the First World War). There is no copyright information on the reverse of the card – instead, the publisher's name is printed along the front right hand edge of the card. The inscription reads: Meissner & Buch, Leipzig. Künstler-Postkarten Serie 1016 Gesetzl, geschützt - Meissner & Leipzig. Artists Postcards Series 1016 Copyrighted design.

The title of the series is printed along the left hand edge: Aus “NANSEN In Nacht und Eis” - From “NANSEN, In Night and Ice”. There were twelve postcards in all with artwork by A. Goldfeld, who has signed the card, and this image is labelled “Fram” Im Ewigen Eise, 1894 - “Fram” In the Perpetual Ice, 1894.

The detailing on this card is absolutely gorgeous – optical colour mixing by intermingling dots of colour has been used to create the subtleties in the sky, clouds and ice, recalling the pointillist technique which had been introduced only a decade earlier.

I am thrilled by my market stall discovery and now want to collect the entire set!

Beth Niquette said…
What a marvelous find! I LOVE the colors of this postcard, with its dated notation. I wonder what the story is behind this postcard?

Thank you for the research you did into this event. I shall have to read further about this. I adore history, and though I've read smidgens of it over the years--I've never actually researched it!

First of all, Mea Culpa for just assuming instead of asking your nationality. Lucky you, by the way where is your miracle store in Rome exactly ?

Any way, once again, you just made me travel both artistically and historically. Well, I know some of the names your talking about but will be totally incapable to put them in the right context, the things we've learn and that you forget it's amazing.

This postcard is a lovely piece of art, I like this fire around the boat, nothing blue, no danger around, I can't explain but painting with boats, water, horizon are heartwarming to me.


P.S : Normally if my plans hadn't been change two days ago, I should have been in Rome since wednesday for an appointment and I planned to see Eros Ramazzotti tonight at the olimpico stadium.

Happy friday and salute if you drink some wine this weekend

Irene said…
What a lovely selection you've posted. And such great info, I need that, we must always keep interested in things we know little about. Thank You
June 22, 2013 at 2:04 AM

Maria said…
Wow! To say I'm blown away by the colors is an understatement. This is really beautiful! Thanks for sharing and for the text, too. I wish I can join a polar expedition cause I have this odd dream of hugging a polar bear :D *yep I know that sounds crazy*
June 22, 2013 at 3:28 AM

VioletSky said…
I bet the postcard is stunning to see in real life!

May I say, though, that your post is really hard to read with the dark chocolate background and grey type.
June 22, 2013 at 8:55 PM