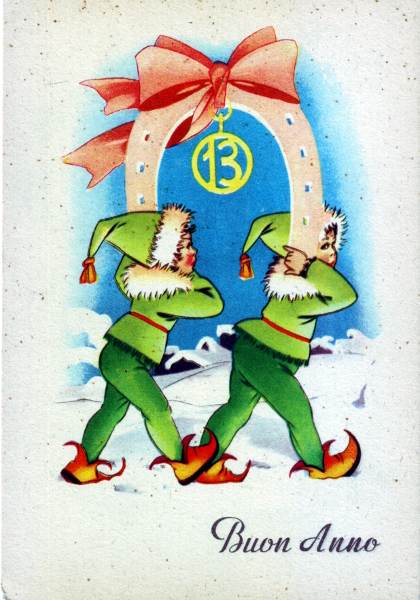 With 2013 very nearly upon us I thought this Italian vintage postcard would be an excellent choice to celebrate the New Year! Published by a company indicated only by the simple initials T.E.L. printed on the reverse with no further markings, this uncirculated card was probably issued during the 1960s.

The lucky horseshoe has been a popular motif on postcards since the early 1900s, although there has always been some debate as to whether the horseshoe should be depicted with the open end up or down. Elves (or Gnomes) also seem to appear on New Year's Eve cards with alarming regularity! Less common in English speaking countries, of course, is the appearance of the number 13 on a greetings card. Fear of the number 13 is very common amongst the superstitious in many parts of the world, but in Italy 13 is, in fact, considered a lucky number – so the number 13 set inside a lucky horseshoe carried by Christmas elves makes this New Year's Eve greeting card even more auspicious!