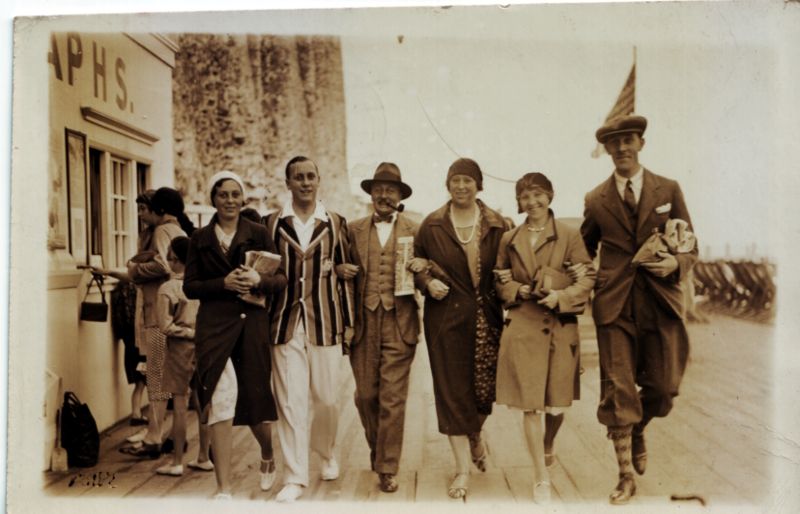 I happened upon these vintage sepia real photo postcards on a market stall on a recent trip back to the UK. Snapped by one of the hundreds of seaside photographers working between the wars for the prolific Sunbeam Photo Ltd., in the British seaside resort of Margate in Kent, these are wonderfully spontaneous shots of ordinary families as they stroll along the promenade in Cliftonville dressed up in their Sunday best.

These photographs were all the rage in the days before cameras were widely owned. From the 1920s up until the 1970s professional photographers would take paparazzi-style “walking pictures” of holiday makers and then hand them a receipt – the resulting prints could then be purchased as a souvenir of their holiday the following day by presenting the receipt at the photographer's kiosk. The very nature of these unposed shots makes them utterly unique and a hugely important record of the customs and fashions of the day. The photographers behind these fascinating examples of early street photography remain anonymous.

Started by John Milton Worssell, with help from Frederick Lewis Pettman (who would become Mayor of Margate in 1932), in about 1919, Sunbeam operated out of 82, Sweyn Road, Margate. In their heyday in the 1930s they are known to have shot around a staggering 35,000 walking pictures on a busy bank holiday! (See: Go Home on a Postcard.) The postcard above was quite possibly taken over a Summer Bank Holiday on 31 August 1931, as it was posted only a few days later on 4 September. The fashions are still reminiscent of the 1920s in this shot - I love the tall chap in a flat cap and plus fours on the far right and the classic striped boating blazer worn by the youngest man.

The photograph below, on the other hand, was possibly taken a little earlier in the 1920s, judging by the style of the cloche hats worn by the women and the baggy fit of the man's trousers. The postcard was never posted, however, although the reference number in the corner might give a clue to the date it was taken if records still exist. Whilst researching this post I happened across another shot of the very same couple and their baby on the Daily Mail website  – a remarkable coincidence!

Beth Niquette said…
Have I told you how much I appreciate you? ((hugs)) Thank you for posting such a marvelous postcard for PFF.

Christine H. said…
These photos make me want to travel back in time. If I could just find the right outfit, I'd like to step into that first photo.
June 29, 2012 at 9:07 PM

Sheila @ A Postcard a Day said…
Cliftonville is, I suppose, quite up-market in comparison but poor old Margate isn't what it used to be any more.
June 29, 2012 at 9:58 PM

Maria said…
Thanks so much for the very informative post :) And really nice postcards, too!

Sreisaat said…
These are fantastic cards and what a wonderful memento of a bygone era!
Although almost everyone has a camera these days, street photographers are still common in Cambodia.

Anonymous said…
Any chance of a decent scan of these for my walking pictures project (the shots on the Daily Mail site are ones I sent them, so be great to tie up the pair again after 70+ years!). Simon (gohomeonapostcard.wordpress.com)
December 30, 2012 at 9:24 PM

Anonymous said…
The numbers on Sunbeam Photos are prefixed with a letter indicating the location in Thanet. The one with "N" tells us that it was taken at Newgate Gap.