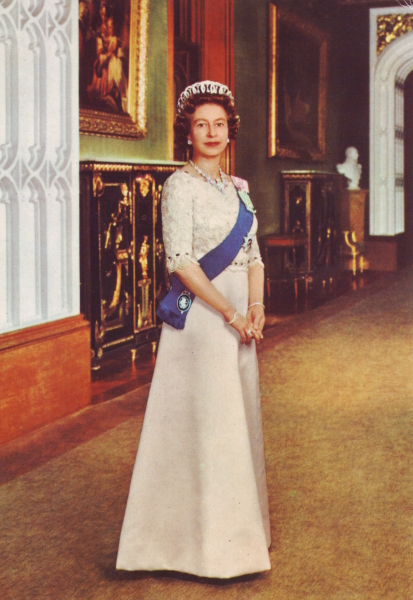 This lovely full length portrait of Queen Elizabeth II was taken by photographer Peter Grugeon F.R.P.S. at the time of Her Majesty's Silver Jubilee in 1977, and was issued as a commemorative postcard by John Hinde Ltd. She is wearing a tiara hung with pendant pearls known as the 'Grand Duchess Vladimir Tiara', which was allegedly smuggled out of Russia during the Russian Revolution, whilst her necklace was originally created to honour Queen Victoria during her Golden Jubilee in 1887. The pale pink Royal Family Order of King George VI is seen pinned to the blue sash just below her the left-hand shoulder, with the pale blue Royal Family Order of King George V, of which Queen Elizabeth II is the only surviving member, immediately below it.

I remember that particular Jubilee, celebrating Queen Elizabeth's first 25 years on the throne, very well – it was one of the first Royal occasions to have made a real impression on me as a child, with summer street parties and Union Jack bunting flying everywhere.

This year, of course, sees the Diamond Jubilee of Elizabeth II with celebrations throughout 2012 marking the 60th anniversary of her accession to the throne upon the death of her father, King George VI, on 6 February 1952. In the UK a four-day holiday this weekend will honour her Diamond Jubilee, coinciding with the Queen's Official Birthday on 4 June. Hip Hip Hooray!