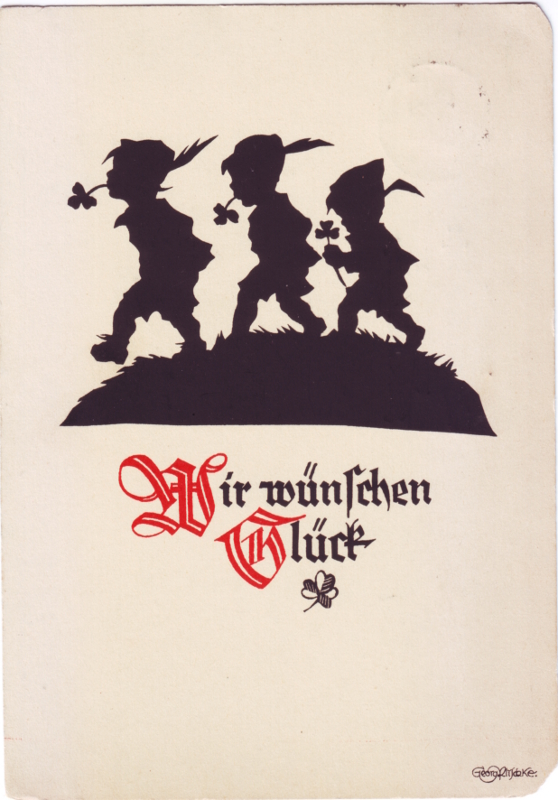 2012 is going to be a tough year for those of you who are superstitious – today is only the first of three occurrences in the calendar of the infamous Friday the 13th! A good luck postcard seems in order, therefore, so here's a very fine example of an artist signed vintage postcard featuring work by the master of scissors and silhouettes Georg Plischke.

Whilst he appears to have been enormously prolific in his output, tracking down Plischke's personal history is a little tricky. He was born in 1883 in Neisse, one of the oldest towns in the politically contested Silesia, but the town was placed under Polish administration after the Second World War and renamed with the Polish spelling of Nysa. At that time, much of the town's German population was forcibly expelled, including Plischke, who was driven from his home and forced to leave his already established publishing house, setting up shop in Unterwössen, in Upper Bavaria, the following year, where he would live and work until his death in 1973.

This postally used postcard was sent as an Easter greeting from Lübeck, Germany to Canterbury in the United Kingdom on 14 April 1938. It carries a Deutsche Reichspost 5 Pfennig stamp with a portrait of Paul von Hindenburg, which had been issued some four years earlier in 1934, rather than a more recent portrait of Hitler whose grim scowl had started appearing on stamps in 1937. The stamp has luckily been placed slightly high allowing us to see the bottom of the distinctive Plischke Karte stamp box and the number of this design – 59. There is also a clear postmark advertising overseas telegrams and German cable routes, in a similar gothic font to that used elsewhere on the postcard.

As is often the case with vintage postcards, the jolly good luck message seems at odds with the historical events of the day - the card was posted a month after the Anschluß (Anschluss), when Nazi Germany annexed Austria, and as we now know, the outbreak of World War II was looming.

Christine H. said…
Great card. It reminds me of the ones my grandmother used to send us. It's interesting that the cancellation urges people to only use German radio and cable lines, perhaps as a way of reducing foreign influence?
January 13, 2012 at 11:42 PM

Paul van Yperen said…
Beautiful card. Germany seems to be the country for silhouette art. We have a dvd of a German film of the 1920's, which was made completely with silhouettes. The director was a woman, Lotte Reiniger. Happy PFF.
January 14, 2012 at 2:44 AM