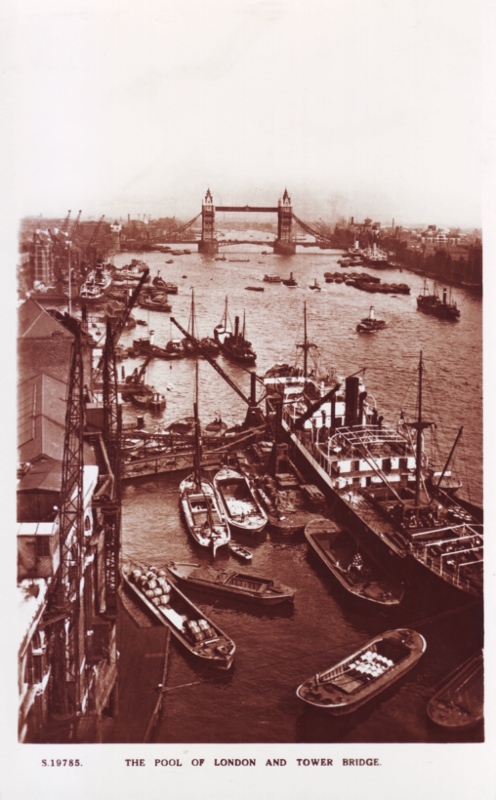 Every time I visit London I'm struck by the amount of architectural changes that happen in the city - old buildings come down, new buildings go up – it's a city that is always in flux! No trip to London for me is complete without a walk across Hungerford Bridge over the Thames to the Southbank – the views from the bridge are spectacular, with the Houses of Parliament and the London Eye on one side, and the City and St.Pauls on the other. The City skyline always seems to be dotted with cranes and new constructions, but with the countdown to the 2012 Olympic Games well underway, the whole of London now seems to be abuzz with building activity.

This real photo 1940s postcard of the old London port at the Pool of London, with Tower Bridge in the background, illustrates perfectly just how busy London, and particularly the Thames, has always been. The cranes in this photograph are part of the docks – building cranes didn't arrive until the urban development of the area during the 1980s and 1990s. After centuries of use, the advent of shipping containers and coastal deep-water ports in the 1960s saw the dramatic demise of the Pool of London as an important commercial shipping port.


“Let us all strive without failing in faith or in duty”

Now known as the War of the Unknown Warriors Speech, it was broadcast by the BBC on 14th July 1940. A previous owner of this postcard has marked the back with the date 1945, but I suppose it would be reasonable to assume that it may have been issued at anytime between 1940 and the end of Churchill's first term of office in 1945.

The correct version of Churchill's words are towards the end of this passage:


"This is no war of chieftains or of princes, of dynasties or national ambition; it is a war of peoples and of causes. There are vast numbers, not only in this island but in every land, who will render faithful service in this war but whose names will never be known, whose deeds will never be recorded. This is a war of the Unknown Warriors; but let all strive without failing in faith or in duty, and the dark curse of Hitler will be lifted from our age."

Joy said…
How interesting it just says by the quote, the prime minister. I love historic pictures of docks full of activity.
September 2, 2011 at 7:47 PM

Sheila @ A Postcard a Day said…
I have just recently sent someone a reproduction of a photo showing the St Pauls with some artists. The whole area looked devastated so I wonder if your photo dates from before the Blitz.
September 2, 2011 at 8:12 PM

Postcardy said…
Interesting history. I had never heard of the "Pool of London" before.
September 2, 2011 at 9:02 PM

Christine H. said…
Thanks for correcting that quote. Makes quite a bit of difference!
September 3, 2011 at 12:32 AM

Postcard Journeys said…
This postcard is certainly a treasure for keeps. I love how it brings one back to the past.
September 3, 2011 at 8:03 AM