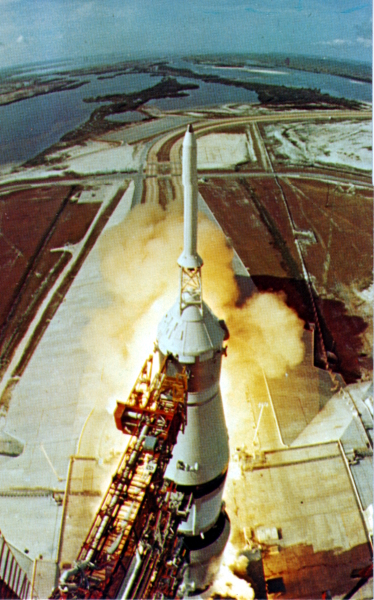 The Space Shuttle Atlantis landed at the Kennedy Space Center in Florida for the last time on Thursday 21 July bringing the Space Shuttle Program officially to a close and marking the end of an era. The Hubble Space Telescope, that extraordinary instrument, which has brought the universe closer to us via stunning images over the last twenty years, was originally carried into orbit by the Space Shuttle Discovery in 1990 and has relied on regular servicing missions by Space Shuttle crews for its maintenance. With the closure of the program the telescope is expected to continue functioning until at least 2014, but will eventually stop working.

The final Space Shuttle landing, of course, falls very close to one of the most famous anniversaries in the history of space travel – the Apollo 11 mission and those famous first steps on the Earth's Moon on 20 July 1969 by Neil Armstrong and Buzz Aldrin.

These two vintage chrome printed postcards in mint condition depict iconic moments in the Apollo 11 space story: the launch of Saturn V on 16 July 1969, carrying the Apollo 11 crew consisting of Armstrong, Aldrin and Michael Collins, together with their Lunar Module Eagle and the Command/Service Module Columbia; and Neil Armstrong's photograph of Buzz Aldrin on the Moon's surface, in which he is reflected in Aldrin's visor. 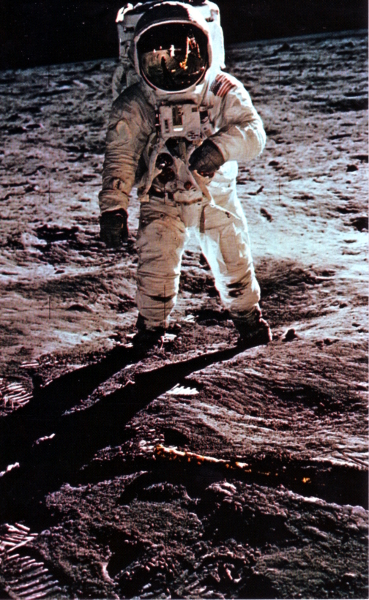 The launch card was issued by NASA Tours (conducted by TWA) and numbered 115153. It carries the following description:


At the moment of ignition, swing arms release and prepare to move away, clearing a path for the Apollo 11 space vehicle to lift off launch pad 39A.

The Aldrin Moon walk card was distributed by the Texas based G. P. Slide Co., Inc., is numbered 310121 and carries a longer description:


Edwin E. Aldrin, Jr., LM pilot, walking on the moon. The knees of his pressure suit are smudged with moon dirt. Reflected in his golden-faced visor are the white outlines of Neil A. Armstrong, Commander, the landing craft, Eagle, the American Flag and one of the scientific experiments they set up. Their foot-prints are visible in the foreground.

It is perhaps this photograph, however, more than any other, which has helped fuel Moon landing conspiracy theories over the years. This postcard shows the image pretty much how Armstrong took it – with the upper frame cropped close to Aldrin's head. Within hours NASA had tidied the image up for aesthetic reasons of balance and added more black space above his head, thus adding to the claims that the entire Apollo program was a hoax. And as to what I think?...as Fox Mulder would say, I want to believe! You can read more about the history of the Buzz Aldrin photograph by clicking here.

Beth Niquette said…
I really enjoyed reading about these postcards! Thank you for sharing!
August 26, 2011 at 7:58 PM