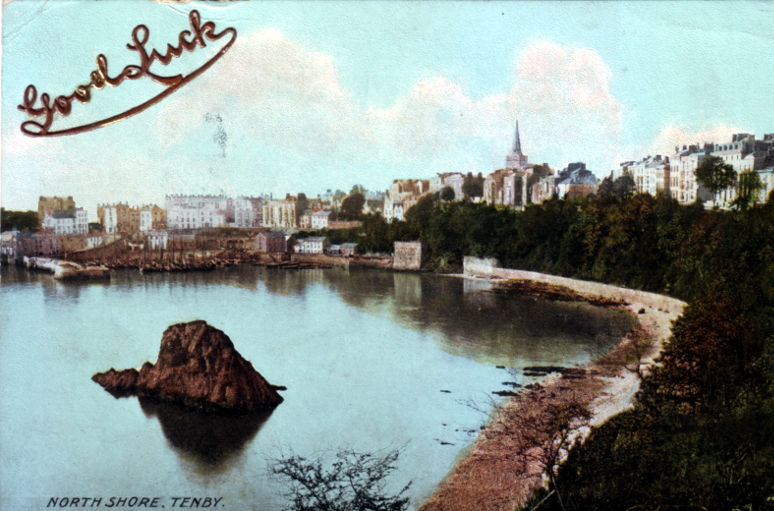 Many international readers of this blog probably don't realise that in Italy where I live, Friday 17th is the equivalent of the more commonly recognised date of Friday 13th. I have even read that the Italian national airline carrier Alitalia has removed seat 17 from their planes, but I suspect that this might be an urban legend! One popular theory behind this peculiarly Italian superstition is that if the Roman numerals for 17 (XVII) are rearranged they spell “VIXI”, the Latin for “I have lived” or “My life is over”...spooky...or not, depending on how susceptible you are to such things. To cross my virtual fingers, however, I thought I'd post this vintage Good Luck postcard from 1909...just in case!

Good Luck postcards sent from British seaside resorts seem to have been all the rage in the early decades of the last century – I have a novelty card posted as late as 1958 from St.Ives, whilst this view of North Shore, Tenby, as with the postcard of Tenby, South Sands, which I shared over the festive period, was sent as a Christmas greetings card.

The popular seaside destination of Tenby is a walled medieval town and one of the jewels in the crown of the beautiful Pembrokeshire coastline of South West Wales – even one of Britain's most celebrated British artists, Joseph Mallord William Turner (1775-1851) made several water colour sketches of Tenby, the North Shore and in particular Goscar Rock, which looks like an island in this postcard, but can be easily reached at low tide where it sits in the middle of the sands.

The vintage postcard was published by ETW Dennis & Sons, Ltd. (Scarborough and London, England) early on in a long career that started in 1901 and is still operational today. Issued as part of their “Dainty Series” No. 20205, it carries their rather lovely logo on the reverse and was printed using the halftone lithographic method – in fact, the dots that create the areas of sky and cloud are easily visible with the naked eye.

The final detail is, of course, the Good Luck message itself, written in tarnished bronze coloured embossed letters that seem to have been glued to the surface of the front of the card, rather than pressed into the postcard, as the reverse of the card is completely smooth.

Tenby, as you'll see from the photo below, has changed very little over the years!

dakotaboo said…
I remember Tenby well. On a gloriously sunny day, a huge cloud came over the beach and we had the biggest hailstones I'd ever seen. They really lashed against our bare leags as we tried to shepherd the kids off the beach to shelter. Of course by the time we had found shelter the cloud had passed.
June 17, 2011 at 7:10 PM

Joy said…
That is a dilemma, whether to be wary on the 13th or 17th. You are right it does not look as though Tenby has changed much over the years apart from the fact that people tend to paint the house fronts in colours nowadays. I like that trend.
June 18, 2011 at 12:56 PM

Dave said…
My experience of Alitalia is that they should remove all their seats ! Nice idea for a blog. Have a look at my postcards at www.oldstratforduponavon.com
July 6, 2011 at 12:52 PM