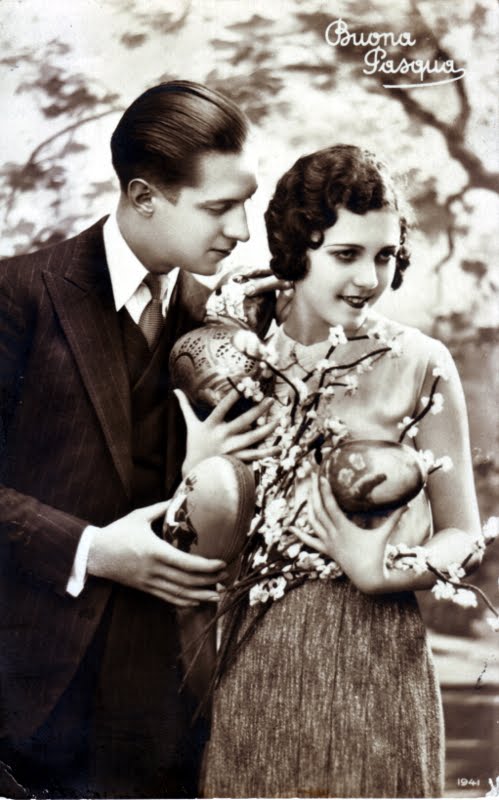 When I saw this vintage 1930s real photograph Italian postcard on a stall in Rome I was instantly attracted to the rather kitsch staged scene of a romantic couple clutching Easter eggs and cherry blossom branches – it's highly reminiscent of the poses in French postcards of the 1920s, only this later card hasn't been embellished by the hand tinted colours that were so popular in the previous decade.

The models in this scene looked familiar to me – hairstyles and clothes of the day tend to blur resemblances to modern eyes, but when I got the card home and double-checked my collection I found what I'm pretty certain is the same couple posing in the snow, in a New Year's postcard from a couple of years earlier (click here to see my Christmas post). Issued by the exact same Turin-based publisher Fotocelere di A. Campassi in 1937 (although not posted until 1939), it was also dated in the same fashion as the earlier Christmas card using both the Anno Domini system as well as Roman numerals from the dark days of Italian Fascist Government with "1937 XV" printed immediately after the company address on the reverse of the card.

A little metallic tarnishing in the darker areas indicates that this is probably a silver bromide print - it's a pity that those eggs didn't get the odd daub of colour too!

Have a very Happy Easter!

Check out the Vintage Postcard Store for more Easter postcards

Sreisaat said…
This is beautiful, Debbie. The tone of the postcard reminds me so much of the black and white movies of Chaplin :D And how good is that finding the same "models" in your other postcard?

Sheila @ A Postcard a Day said…
The Christmas colours weren't exactly subtle! There seems something odd about the way they are clutching the eggs and branches here, almost as if the eggs were added later.
April 22, 2011 at 4:35 PM

Postcard Perfect said…
This is a beautiful photo!
Have a wonderful easter.

Snap said…
Wonderful find and it does have the feeling of the wonderful back and white films. happy easter and happy PFF!
April 22, 2011 at 10:38 PM

MrCachet said…
I've never seen a card like this before, and your little story to go with it is also special. Have a very Happy Easter!
April 23, 2011 at 12:38 AM