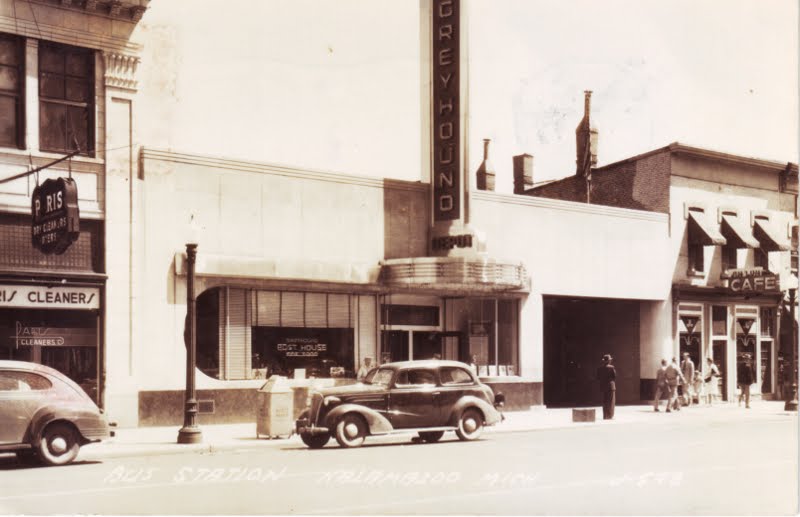 Kalamazoo...What a wonderful name! So varied, in fact, are the theories behind this strange name that was given first to the river and then to the city, county and township, that Wikipedia has dedicated a whole page to the Etymology of Kalamazoo. What would seem certain, however, is that this evocative name was derived originally from the languages of indigenous peoples of what is now the US state of Michigan.

I just knew I had to have this vintage real photograph postcard of the old Greyhound Bus Station in Kalamazoo when I came across it on a market stall in Rome last weekend. The postcard was issued by the enormously prolific LL Cook Co., Milwaukee, so probably isn't particularly rare, but topographical postcards of US cities aren't that common here in Europe – in fact, this card wasn't even posted to Italy, but was instead sent to an address in Brussels, Belgium, on May 10, 1951.

I was even more excited when I discovered that it records a part of “lost” Kalamazoo – the old Greyhound Bus Station at 318, West Michigan Avenue, back in the days before it moved to the Amtrak depot. The neighbouring Paris Cleaners is another historic venue; opening its doors in Kalamazoo in 1903, the dry cleaning company moved to its current location on the corner of Crosstown Parkway and Westnedge Avenue back in 1956 – this photograph shows an even earlier site. Wanting to track down the very spot, I took a virtual stroll along West Michigan Avenue thanks to Google Maps Street View, until I stumbled upon the exact location! Looks like Jim Lum's Cafe was a place called the Copy Cup when the Google Maps camera passed by, although a quick search has revealed that it is now known as Pistachios, whilst the Grehound station itself is now a branch of the Bank of America.

dakotaboo said…
Great postcard. I have fond memories of Greyhound bus stations having spent 4 months in the US after I graduated.
February 4, 2011 at 6:40 PM

Christine H. said…
There's a collecting theme...you could collect old postcards of bus stations across the country. Could be amusing.
February 4, 2011 at 7:48 PM

Joy said…
A Greyhound bus always seems a romantic idea of crossing America, I suspect maybe not so much today. The now and then view is interesting.
February 5, 2011 at 6:41 PM