The Sovereign Prince of Monaco's Palace - 1959 For many people of a certain age the Principality of Monaco will be forever associated in our minds with the American actress and star of three unforgettable Alfred Hitchcock movies To Catch a Thief, Dial M for Murder and Rear Window – the timeless beauty Grace Kelly. Hollywood was rocked to its foundations when she retired from films and married Rainier III, Prince of Monaco at the peak of her career in April 1956 and became Her Serene Highness The Princess of Monaco, although the shorter title of Princess Grace was quickly adopted by fans and press alike.

When I found this vintage souvenir postcard of the main facade of the Palace of the Sovereign Prince of Monaco – Le Palais de S.A.S. le Prince de Monaco – the first thing I did, therefore, was to double check the date; when I saw that it had been posted in 1959, I found myself smiling to think that this was more or less how Princess Grace would have found it when she first moved to Monte Carlo. Indeed, it was her husband Prince Rainier III, who is “credited with restoring the greatest part of the lost glory of the Palace to its present splendid state”. (See: The Prince’s Palace of Monaco)

The postcard itself is a scalloped edged tinted Bromocolor real photograph card printed from a black and white original image. The reverse of the postcard is also interesting from a philatelic point of view – the 20 franc stamp is cancelled with a fine postmark advertising the first edition of Scolatex, an interschool and international educational philatelic exhibition which ran from 16 - 20 May 1959 – and would later become a prestigious event organised by the Monaco National Commission for Unesco. 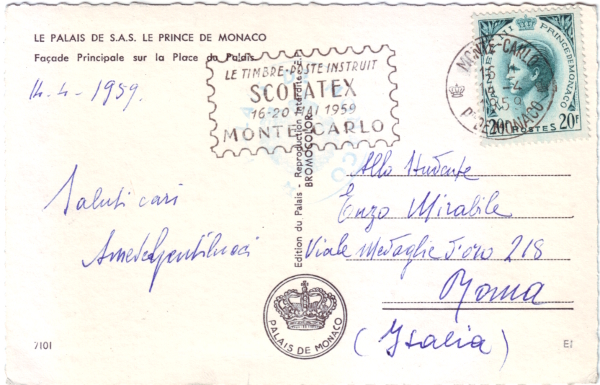 Monaco is, incidentally, the second smallest country in the world by geographical size - only the Vatican City, the walls of which I can see from where I'm sitting at my computer as I type - is smaller.

Joy said…
Her marriage was such a romantic story especially in this dull post war time.
January 14, 2011 at 7:59 PM

Postcardy said…
That's a pretty card. I remember when Princess Grace got married because I was collecting stamps back then and there were commemorative stamps.
January 14, 2011 at 8:23 PM

MrCachet said…
Either Prince Ranier or his father collected stamps, and that's the reason for the philatelic connection.
January 14, 2011 at 8:47 PM

Funoldhag said…
Such a lovely story of Grace and her Prince. Nice to recall the story of the beautiful woman, her charming prince and their fairy tale wedding. Magic. Carol
January 14, 2011 at 8:50 PM

Sheila @ A Postcard a Day said…
Her death was so tragic. I always remember Monaco as having beautiful stamps from many years ago, before many countries had regular commemorative issues.
January 14, 2011 at 9:30 PM

Terry said…
Howdy
Happy PFF to you ,wonderful postcard !
I truly enjoyed this post with all the great background information added to it !
What a beautiful place to visit with so much history .
Thank you for sharing a ray of sunshine upon a cloudy and cold Texas afternoon.
Have a fantastic rest of the weekend .
Happy hugs sent from Texas
Until next time
Happy Trails
January 14, 2011 at 11:12 PM

viridian said…
Thank you for sharing. I think I have a monaco stamp that I have scanned for a future Sunday Stamps meme.
January 15, 2011 at 12:39 AM

Max said…
We spent a day in Monaco on a cruise a few years ago. The whole place (about the size of Central Park) is amazing. The castle in the picture is on the top of a steep hill, with the Monte Carlo racetrack, the biggest yachts you've ever seen, and the opulent casino just below.
January 15, 2011 at 4:41 AM

Paul van Yperen said…
Excellent post. Every time you gave us a bit more information to give the card another look. I enjoyed it. Happy PFF.
January 15, 2011 at 11:27 AM