When I first set eyes on this vintage postcard of Times Square in New York it wasn't the image that grabbed my attention at first, as fabulous as it may be – who can resist a nostalgic image of 1950s New York after all? Instead, it was the sheer size of the postcard that made it stand out from the others in a bargain box – at 22 by almost 14 cm (8.7 by 5.5 inches) it really is huge! It has suffered a lot of creasing over the years – probably much of it caused when it crossed the Atlantic from NY to Rome in 1962.

This Times Square souvenir postcard may have been posted in 1962, but we can date the photograph quite precisely to several years earlier thanks to several clues in the image: Loew's State Theatre is showing The Phenix City Story, which was glowingly reviewed by the New York Times on September 3, 1955 as “an uncommonly good little film” the day after it opened at Loew's State (see Sin in the South; 'The Phenix City Story' Has Debut at State), whilst for movie goers looking for something more lightweight, the Criterion is offering the Dean Martin and Jerry Lewis vehicle You're Never Too Young, which had been released ten days earlier on August 25, 1955.

Vintage topographical postcards are a treasure trove for information about past times and this card is a wonderful example - I love the Chevrolet and Admiral Television Appliances adverts, which for a European seem so quintessentially 1950s America – but it is the Bond Clothing Store on the right, with its distinctive Two Trouser Suits sign that seems to have had the most unusual history. As a final confirmation of the date of this photograph, in 1955 Pepsi took over the sign site and installed two 50 foot tall Pepsi bottles either side of a giant bottle cap, above their slogan 'The Light Refreshment' and a waterfall. In the 1940s, instead of Pepsi bottles there had actually been two 7-storey tall nude figures of a man and a woman causing guests at the Astor Hotel opposite to complain about their indecency! Look closely and you'll also see a branch of The Woolworth Store on the ground floor, next to Whelan Drug. (See New York Architecture Images for further information about Times Square.) 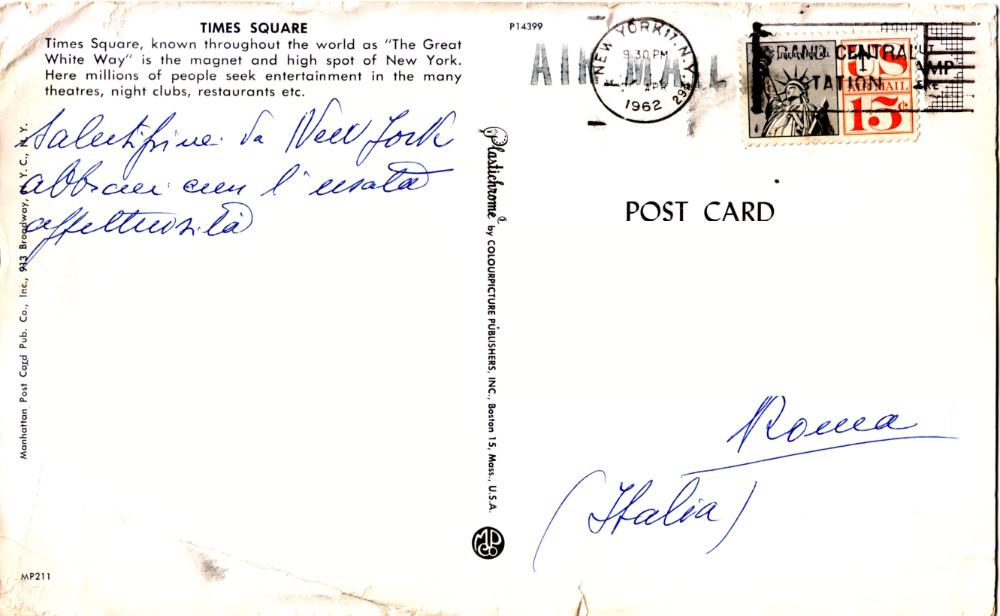 The card carries the names of two publishers with their respective numbering systems – I assume that one company was the printer and the other the distributor and would guess that as it's a Plastichrome card, it was printed by Boston company ColourPictures Publishers Inc., (note the English spelling of “colour”) and distributed by the New York publishers Manhattan Post Card Pub. Co., Inc. I'm including the back of the postcard, but for reasons of privacy have masked the name of the sender and recipient as both parties may quite feasibly still be alive.

Christine H. said…
What a great post! You certainly did your research, and I love all the details. Oh, to be going to see a Dean Martin movie in NYC in the 50s! And what a different place Times Square was. It was lively then, but I have heard from relatives who went there for New Year's Eve that it is such a mob scene that it's kind of scary.
December 10, 2010 at 9:00 PM

Linda said…
Great card with wonderful detail! This was the NYC just beginning to fade when I grew up. Nice to see it fresh in this colorful card. I remember Whelan's, Bond's, and of course who doesn't remember Woolworth's. The 99 cent stores just aren't the same. And yes, Times Square is scary New Year's Eve. Once was enough.
December 11, 2010 at 5:31 AM

Snap said…
Wonderful post! Great research. It is interesting to see things as they were and compare to how things are. Happy PFF!
December 11, 2010 at 1:01 PM

Postcardy said…
That is an ideal subject for a large card. The details stand out much better than they would on a standard size card.
December 11, 2010 at 3:07 PM

Paul van Yperen said…
Can't get enough of Times Square postcards. The crossing of the avenues and all the entertainment venues make it a wonderful, dynamic place. New York, New York!! Happy PFF.
December 11, 2010 at 5:17 PM

MrCachet said…
Well, I noticed the stamp - a 13Cent Airmail that included another New York landmark, the Statue of Liberty in New York Harbor. What a great post!
December 12, 2010 at 5:58 AM

Lyneen said…
What an amazing amount of history in this one postcard.... I remember the Bond, my grandmother worked a Woolworth.... hmmm so much has changed since then.TFS