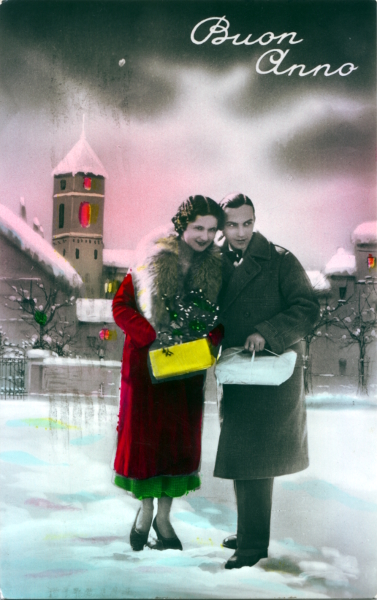 This gorgeous hand-tinted real photograph vintage postcard is an Italian New Year greetings card written, dated and presumably posted, on 31st December, 1936 and postmarked with a cancellation for the following day - 1st January, 1937.

As with any postcards published in Italy during those years, however, there is always a darker side to the story in spite of what, at first glance, looks like a simple romantic card. Issued by Turin-based publisher Fotocelere di A. Campassi during Italy's infamous Fascist decades when there was a bizarre, yet entirely serious attempt to displace the Anno Domini system with Roman numerals to denote the number of years since the establishment of the Fascist government in 1922, the postal cancellation indicates the year as "37 – XV". The sender of the postcard, however, seems to have been rather confused by this system and even gets the year wrong, mistakenly writing "31-12-936 XV" instead of "XIV"! The publisher has also dated this card – if you look very carefully you'll spot "1936 XIV" printed immediately after Via Marochetti 41 (the company address). Even the words Poste Italiane on the 10 cent postage stamp featuring the effigy of Emperor Augustus are flanked either side by a symbolic bundle of sticks featuring an axe known as “fasces” (hence “fascism”). Dark days indeed, but then again, things have been grim of late in Il Bel Paese more recently too, with a modern day wannabe dictator running the country! But I digress...

I still love this somewhat kitsch postcard with its painted backdrop and obviously artificial studio-staged snow scene and was thrilled to find such a perfect example of a year change postcard, which always seem harder to find than one would imagine!

Grace said…
What a beautiful postcard and I even learned something I did not know
December 31, 2010 at 4:53 PM

Sheila @ A Postcard a Day said…
I think they look a bit creepy, especially the man! I vaguely knew about the dating system but only very vaguely. Presumably they thought they would take over the world and everyone would comply with their system, otherwise total confusion.
December 31, 2010 at 5:47 PM

dakotaboo said…
Great card, and thanks for the history lesson - even though I studied history up to A-level, we only ever got as far as the Scramble for Africa and the Boer War, so great to learn something new today. Happy New Year.
December 31, 2010 at 6:40 PM

Lyneen said…
Interesting. I had no idea about the date in Italy during that period of time. THANKS and
HAPPY NEW YEAR!
January 1, 2011 at 7:57 PM

Terry said…
Howdy
Happy New Year and a very happy PFF greeting to you too !
This was a wonderful post .
Great card and the thing about life it is full of good,bad,and oft times strange happenings that we sometimes only see in retrospect.Your post explained this with great eloquence.
Thank you !!!!!
Until next time
Happy Trails
January 1, 2011 at 8:01 PM

Christine H. said…
That's so interesting about the dating system. I had no idea. I notice that French postcards also often have pink skies. I rather like them!
January 2, 2011 at 5:54 AM