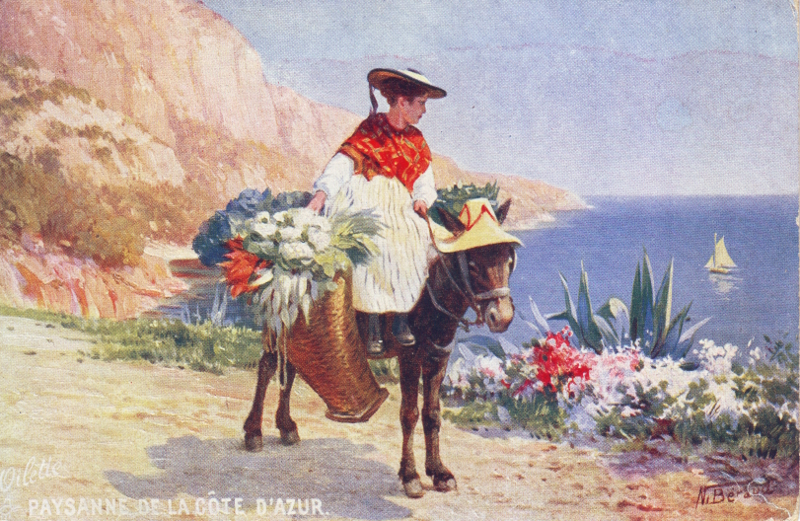 It's been wet weather all the way here in Rome for the last couple of weeks and whilst today has seen some sunshine, the clear skies have brought lower temperatures and there's a distinct chill of winter in the air. Maybe that's what made me choose this gorgeous summer image of the French Riveria today, which features a Paysanne de la Côte d'Azur (translated literally a Peasant from the Côte d'Azur) in traditional Provencal costume, carrying bunches of flowers in a Provence-style basket and sitting on what is now a dwindling local breed of donkey – the Provence or Migration donkey.

I picked up this vintage Raphael Tuck postcard on my last trip back to the UK and was attracted to it instantly, because it was the first time I'd come across a Tuck card that had been issued from the company's Paris offices. As the company grew, they opened offices in both New York and Paris in 1900 and indeed, the family business is credited as Sté Ame Raphael Tuck & Fils on the reverse of the card.

The postcard is uncirculated, but I'm guessing that it was issued in the early part of the last century because this is one of Raphael Tuck & Sons' enormously popular Oilette series – if you look carefully you'll see the Oilette logo in the bottom left corner of the card (although this information is not repeated on the reverse). Oilette was a term create by Tuck to distinguish their postcard series that reproduced specially commissioned paintings of popular landmarks or scenes, as opposed to photographic views. Later issues in this series were printed on embossed paper to simulate brush strokes on the surface of a painting, but this particular postcard is completely smooth and printed on rather thick, heavy card. 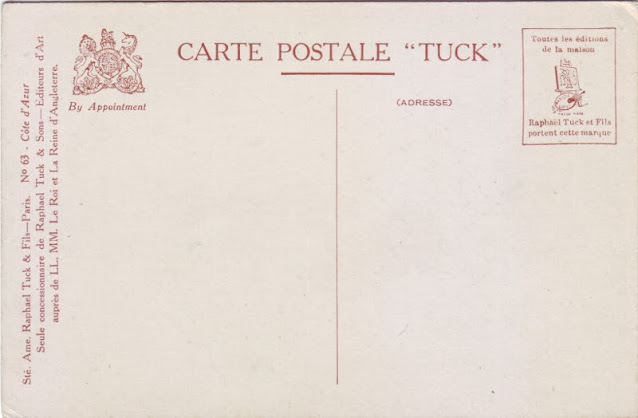 No.63 in the Côte d'Azur series, it is an artist signed view by N. Beraud, clearly a stalwart of the Rapahel Tuck stable of artists as this is a name that appears on not only numerous French postcard views of the time, but everything else from kittens and flowers to soldiers at the front! Whilst I've been able to find a few original paintings by the artist on the Internet, I've been unable to track down any other information as to the identity of this extremely prolific postcard illustrator – was N. Beraud a man or a woman, I wonder? If anybody knows anything more about N. Beraud (or Béraud) please feel free to leave a message below!

dakotaboo said…
Lovely postcard. I have lots of Raphael Tuck cards but have not seen one quite like this before. Happy PFF.
November 26, 2010 at 6:04 PM

Postcardy said…
Thanks for all the Tuck information. I didn't know about the artist or the Paris office.
November 26, 2010 at 6:48 PM

Joy said…
Like Postcardy I didn't know of Tuck's continental venture, fascinating. Nice summery card to cheer one up.
November 26, 2010 at 10:01 PM

Lyneen said…
I love TUCK Postcards... and have a small collection of them. This is a beauty. TFS

Sheila @ A Postcard a Day said…
In spite of the woman being remarkably well dressed for a peasant, the card captures the feeling of the Côte d'Azur very well.

I found a picture of La Turbie by N Béraud. Much the same area so it could well be the same artist. Then I found a French Wikipedia entry about Éloi-Noël Bouvard who apparently signed his works with various names including N Béraud.
November 27, 2010 at 10:14 AM

Christine H. said…
This is lovely. Thanks for all of the information too. I am going to have to search through my cards and see if I have anything by this artist.
November 30, 2010 at 9:08 PM