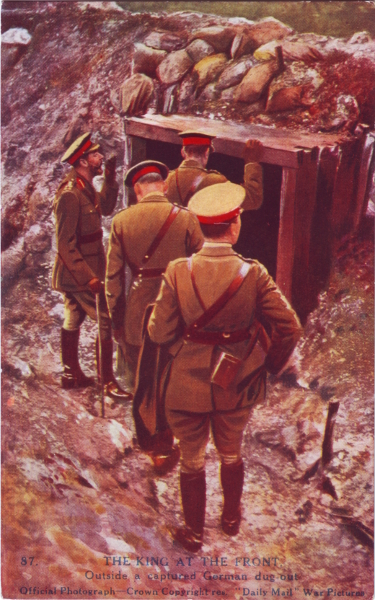 Lest we forget...Today, 11th November, is Remembrance Day, so I thought this image of King George V at the front during the First World War would be a timely post.

Issued as No.87 in Series XI (Nos. 81-88) of the enormously popular official war photographs published in 22 sets of 8 postcards each by the Daily Mail newspaper under Crown Copyright during 1914 – 18, this particular card is typical of the others in its set. Produced exclusively for the British market during the war these postcards obviously tended to emphasise the positive and are mildly propagandist showing battle victories and celebrating fallen soldiers as war heroes. As the back of the card shows, this military postcard had to pass the censor before publication. 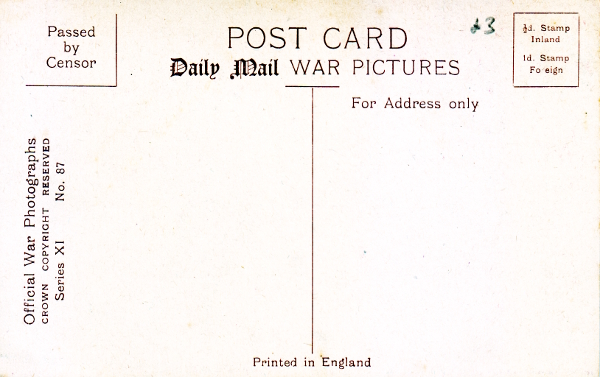 This image shows the King outside a captured German dug-out, whilst the remaining images in this set were entitled: The Smile of victory; King George and King Albert enjoy an amusing anecdote; A Talk to peasants; The King meets a hospital matron; Attending church service in the field; At the grave of a fallen hero; A Greeting from the troops.

A printed colour postcard, from a hand-tinted back and white photograph, this uncirculated divided back postcard is in pristine condition. A lovely card for the collection, which I picked up on my last trip back home to the UK.
Military Royalty War
First published on November 11, 2010 by LiT Web Studio