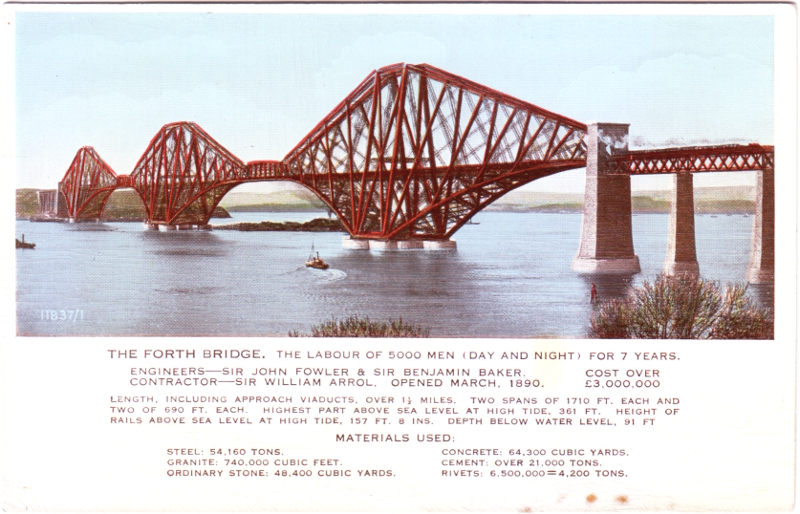 Whenever faced with what seems like a never-ending task, an old English colloquialism that I learned as a child will still spring to my mind – it's like painting the Forth Bridge! It refers, of course, to the maintenance required to keep the Firth of Forth Rail Bridge, the second longest cantilever bridge in the world, looking new - the very second the bridge has been repainted, work commences immediately on the next repaint! Or so it has always been said. Imagine my disappointment, therefore, when I recently discovered that this expression is based on an urban myth! Whilst the 1.5 mile long bridge does have a permanent maintenance crew, according to a 2004 New Civil Engineer report on modern maintenance, the practice of continually repainting the bridge has never actually existed!

The Forth Rail Bridge was opened on 4 March 1890 at a cost of over £3 million. This uncirculated postcard was published by Scottish firm Valentine's some forty years later in the 1930s, but it is clear from the statistics proudly listed on the front of the card, that it was still considered an extraordinary feat of engineering – as it is to this very day, in fact.

This postcard was issued as part of Valentine's Carbo Colour cards, but unlike many in this series from the 1930s, it has a plain white border instead of a Tartan frame. It uses a limited halftone palette and almost looks like a hand-coloured drawing – I particularly like the detail of the steam train, with its long trail of smoke billowing behind it! Unfortunately this postcard has suffered some water damage over the years - its glossy gelatin finish has some cracking to the surface and it has yellowed over time. It was such a striking image, however, that I still wanted it for my collection!

I also stumbled upon this wonderful bit of footage from 1963 of the old ferry (visible in the postcard) at South Queensferry and the Rail Bridge. At the end of the film the uncompleted Forth Road Bridge is also shown - the ferry stopped operating in 1964 when the road bridge opened. Watch the video below or click here to watch on YouTube.

Christine H. said…
I have an old Firth of Forth print from valentine too. I love the name Firth of Forth. Every time I look at the picture it starts me saying Firth of Forth and makes me smile. Some people are so easily amused :)
November 19, 2010 at 6:15 PM

viridian said…
it is worth expanding the image. I noted the train and then I realized how large that bridge is!
Happy PFF!
November 19, 2010 at 8:47 PM

MrCachet said…
Unlike the Firth bridge, The Golden Gate bridge in San Francisco, does get a continual paint job. The Golden Gate has a permanent crew working 8 hours a day applying paint to every surface requiring paint.
November 19, 2010 at 8:50 PM

Joy said…
I love all the details about the bridge on the card, wonderful structure.
I always remember 'Richard Hanney' escaping from the police on the bridge in the film 39 steps.
November 19, 2010 at 9:33 PM

Tattered and Lost said…
Well I see Mr Cachet beat me to it because as I was reading your piece I was thinking about the glorious Golden Gate. You can read some interesting facts about it here:

Though I remember well driving over the Firth of Forth not many bridges can match being on the Golden Gate for pure beauty.
November 20, 2010 at 12:40 AM

Sheila @ A Postcard a Day said…
The ferry looks tiny under the bridge! I have a couple of the road bridge when it first opened.
November 20, 2010 at 11:39 AM

Beth Niquette said…
I have always loved bridges, since I was a child. I call the city of Portland Oregon, "Bridge City," and loved the idea of living underneath one of those bridges. lol

This bridge is amazing--I love the postcard and learning about it.