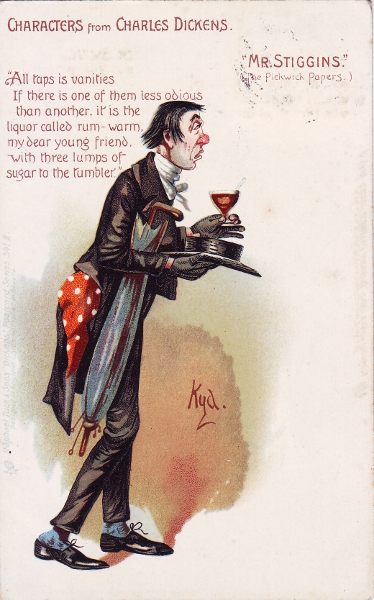 I'm back from my summer vacation in England and Wales and as on previous trips back to the UK I've returned home with my suitcase full of postcards having spent many happy hours perusing flea markets! I'll be sharing some of my finds here on the blog, of course, and today's postcard is one I was particularly thrilled to come across – an artist signed postcard featuring one of Kyd's Characters from Charles Dickens.

Some months ago I wrote a post about The Dickens House Museum and one of Britain's most famous postcard publishers Raphael Tuck & Sons who published many, many sets of Dickens-themed cards over their long publishing life. This undivided back postcard, printed using the chromolithographic method, is from a much earlier series by Tuck featuring watercolors of beloved characters from Dickens, such as this one of Mr. Stiggins, who appeared in The Pickwick Papers. The red-nosed Reverend Mr. Stiggins, is the hypocritical and drunken parson who meets his downfall in Chapter 52.

“Kyd” was the pseudonym of English illustrator Joseph Clayton Clarke (1856-1937), who after only a single day's employment for Punch magazine became a freelance artist specialising in Dickens for most of his career. His illustrations from Dickens were also published by Raphael Tuck in book form – this particular image appears to have first been published in 1889 in The Characters of Charles Dickens: Portrayed in a Series of Original Water Colour Sketches by “Kyd”, a collection of lithographs after original water colors by the artist.

The reverse of the postcard is proudly emblazoned with the Royal Warrant whilst a very early version of their palette and easel insignia is visible, albeit rather faintly, on the front left hand edge of the card. The inscription reads:
The postmark is a little blurred, but looks very much like 1903 or possibly 1908 – given that Great Britain was the first to adopt the "divided back" postcard in 1902, this makes the earlier date more likely. 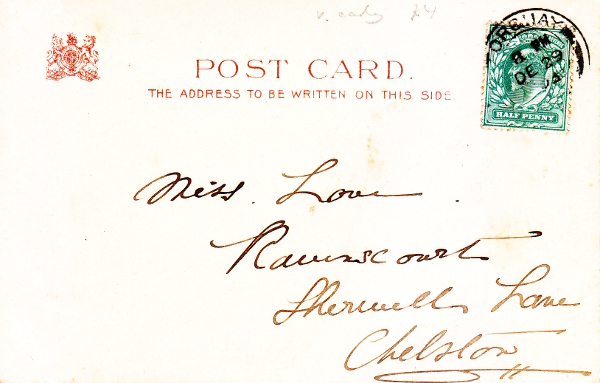 Christine H. said…
What a great card. Wouldn't it be wonderful to have the whole set? Also interesting that it was printed in Bavaria. It seems like most of the German printing was done in Saxony.
August 27, 2010 at 6:07 PM

Beth Niquette said…
I love this card! The artwork is really wonderful and it's rather funny.

Thank you so much for sharing this.

Tattered and Lost said…
Wonderful card! Love the illustration. And the information is greatly appreciated.

I'd say this one is suitable for framing. Would look wonderful with a mat and nice frame.

Postcardy said…
Nice card. It would be interesting to see the whole set together.

P.S. My word verification is "cardisto."

Sheila @ A Postcard a Day said…
Wonderful card, though I can't say I'd fancy the rum and sugar. I really must reintroduce myself to Dickens, now that I no longer HAVE to read him.
August 27, 2010 at 9:49 PM

Paul van Yperen said…
Dickens is a must-read in the Christmas vacation. His characters are so funny and touching. The artwork suits the Dickens style very well. Happy PFF!
August 27, 2010 at 10:17 PM

Mary said…
Incredible vacation souvenir! I love the red nose, and the martini glass for rum and sugar. What fun!
August 28, 2010 at 4:03 AM

Lyneen said…
I cherish all of my Tuck Postcards!!!! great post. TFS and Thanks for stopping by...

dakotaboo said…
Lovely card. I've never come across Kyd before. Glad you were able to find some goodies when back in the UK this summer (and hope the weather was kind to you). I was on the west coast of France for the last 2 weeks and came across a huge postcard stand in a flea market but unfortunately was out cycling at the time so had no sensible way to carry any cards I bought. I did return to the location of the market again but alas the stall was no longer there.
August 29, 2010 at 4:13 PM