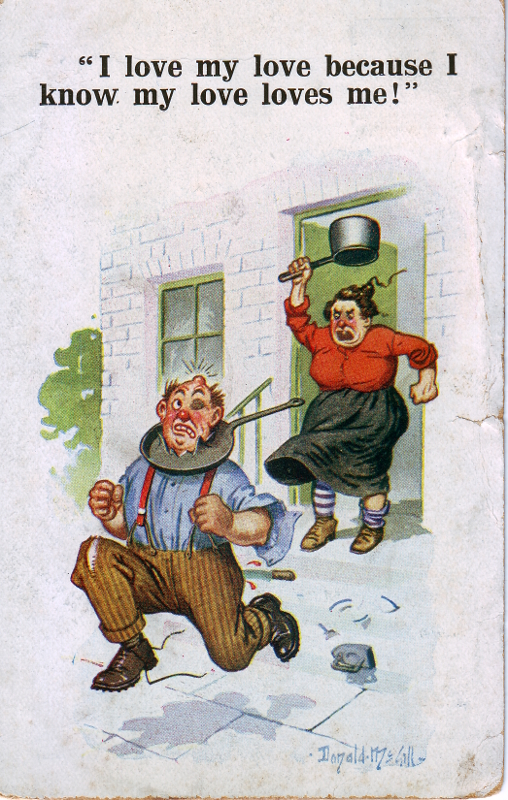 It's hard to believe these days that the innocent kiss-me-quick seaside humour of Donald McGill, the man behind so many of the British everso slightly smutty holiday postcards issued during the first half of the last century, got its creator into quite a deal of trouble with the censors. In 1954, at the grand old age of eighty, McGill was brought to trial charged with breaking the 1857 Obscene Publications Act. Instead of it being thrown out, he actually lost the case and was made to pay a £50 fine and £25 costs.

This artist signed postcard by Donald McGill isn't one of his saucy creations, but does look at one of his classic themes – marital relations – with the stereotypical housewife portrayed as a battleaxe on the doorstep having given her beleagured husband a good battering with the traditional frying pan! McGill produced an estimated 12,000 designs, of which a staggering 200 million copies are thought to have been printed, so this postally used card is hardly a rarity, but caught my eye nevertheless when I spotted it on a market stall in Rome.

Issued as part of the "Comique" series # 5185 by the Inter-Art Co., Florence House, Barnes, London, S.W., the card was posted during the summer on 22 July, 1925, so may well have come from a holiday destination, although sadly that part of the postmark is obscured.

Christine H. said…
I'm so glad to know that there's a Saucy Seaside Postcard Museum. That will definitely be added to my list of places to visit.
July 23, 2010 at 5:54 PM

Sheila @ A Postcard a Day said…
I didn't know about the exhibition in the Tate Britain. The saucy cards still seem to sell well in our local shops, though they aren't really as clever as they used to be.
July 23, 2010 at 10:23 PM