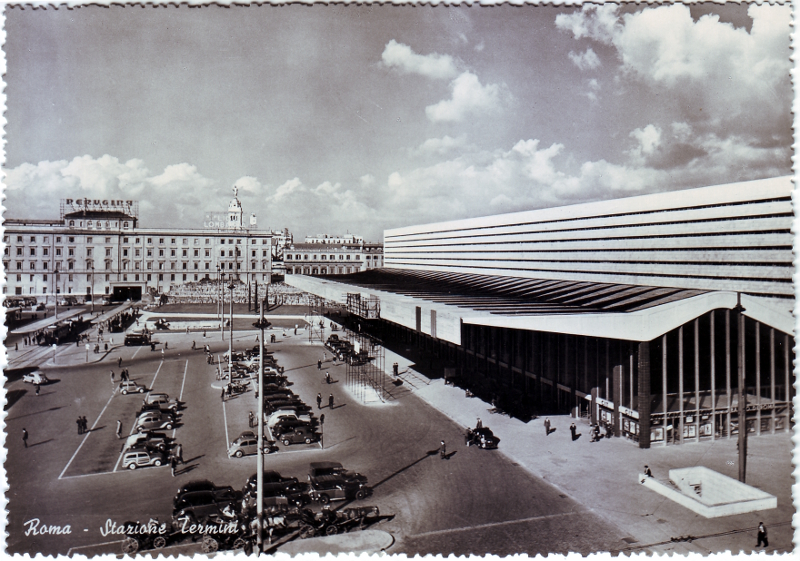 After a long, wet winter and spring, summer has finally arrived in Rome and the city is sizzling hot making most of us dream of August and the vacation exodus to either the seaside or cooler climes! With travel plans in mind I thought it might be nice to share a postcards of Rome's Termini railway station published in the 1950s, when train travel still maintained an aura of glamour.

This stunning glossy black and white real photograph postcard with pristine scalloped edges is an aerial shot of Rome's main station Stazione di Roma Termini (now also named after Pope John Paul II, to whom it was dedicated in 2006). Whilst postcards of major stations are not particularly rare this is such a stunning example that I couldn't resist it, as it illustrates so well the station's architectural achievements - the extremely long, modernist facade in travertine and the gravity-defying reinforced concrete cantilever roof which forms a stunning double curve. The building was designed by two teams of architects - Leo Calini and Eugenio Montuori, and Massimo Castellazzi, Vasco Fadigati, Achille Pintonello and Annibale Vitellozzi – and was only inaugurated in 1950, meaning this postcard from 1953 was very much a celebration of a brand new building.

Published by Enrico Verdesi, a local Rome-based company, this postcard was specifically issued as a souvenir of the first Congress of the International Federation of Engineers which took place in the city from 8 – 11 October 1953 (the event name is written in French on the reverse of the card - Congrès de la Fédération Internationale d'Ingénieurs). Through the wonderful assistance of Google I've also discovered that the congress saw the participation of Pope Pius XII, who gave a speech addressing the social responsibilities of engineers. You can read it here (in French). 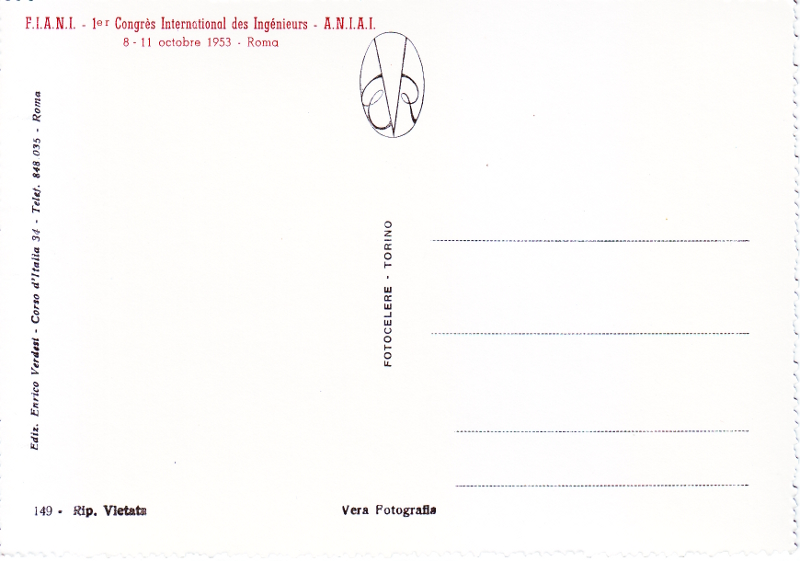 Terminal Station (also known as Indiscretion of an American Wife), the Vittorio De Sica movie starring Montgomery Clift and Jennifer Jones, was also made in 1953. Much of the action takes place within the station and if you know the location, the film is well worth watching for this reason alone!

Find more vintage postcards over at Beth's postcard blog The Best Hearts are Crunchy and join other collectors on Postcard Friendship Friday  - am posting this a day early this week!

Beth Niquette said…
What a fabulous post! I enjoyed every word, and LOVED the postcard!

Paul van Yperen said…
Loved to see the Stazione Termini so shiny and new (and with so little cars). The film clip is great. Happy PFF.
July 9, 2010 at 4:49 PM

Dorincard said…
Very nice card of...urbanity. I appreciate your time, effort and skill in crafting nuanced blogposts, both in content and form.
Your blog is a labor of love (and craft), and a gift to all of us.
:)
July 9, 2010 at 6:58 PM

Mary said…
I've been in this train station! And I guess for an American, train travel in Europe still has an aura of glamour. We're in Europe and we're on a train! Even better, we're in Rome and taking a train to Florence, and then to Paris! Glamour!
July 9, 2010 at 8:32 PM

viridian said…
Thank you for including the film clip - it gave me a great sense of the interior space of the station. Interesting post! Happy PFF.
July 9, 2010 at 10:18 PM