Landscape with poetry by Giovanni Bertacchi - 1928

This gorgeous blue tinted vintage postcard features two lines of poetry by the Italian poet and literary critic Giovanni Bertacchi (1869-1942), which to paraphrase the words, talk of the calm that spreads over lonely pastures through the tinkling sound of herds of cattle. The words chosen match the image perfectly and seem to have been hand stamped separately in the space provided as the words are very lightly indented.

The poet was from Chiavenna and his poetry revealed a love of the local landscape and its mountains and valleys; on some occasions, he even wrote verses in the local dialect known as "chiavennasco". A professor of literature at Padua University from 1916, he resigned in 1938 in protest at the Fascist regime. His most famous collection is probably his first, Il Canzoniere delle Alpi published in 1895.

In doing a little research for this post I was thrilled to discovered that Giovanni Bertacchi was also involved in the production of a series of touristic postcards of Chiavenna as evidenced by some correspondence dated from 1933 in which he provided poetic captions for local views and sites. I've no idea if he was also involved in the production of this earlier postcard but I like to think that it may be a possibility! You can read more about those later postcards at Giovanni Bertacchi LibroWeb (in Italian). 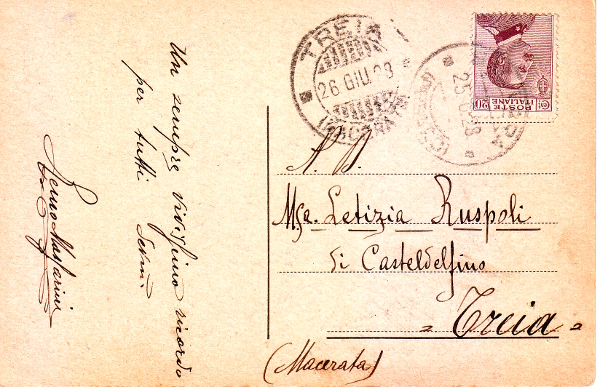 The other aspect of this card that excited my curiosity when I first saw it on a market stall in Rome, was that it was posted to Treia, an exquisite hilltop village in the province of Macerata that I know rather well! I am always curious when I see upside down postage stamps on postcards too – was the sender adding a secret “I love you” message?

Christine H. said…
Oh, and the beautiful handwriting is almost as beautiful as the card itself. I have a card or two tinted blue like this. I wonder if it was just done as a refreshing change from black or sepia, or if there was another reason.
June 4, 2010 at 6:30 PM

Mary said…
I particularly like the feeling expressed in the poetry. Beautiful!
June 4, 2010 at 9:12 PM

Paul van Yperen said…
Wonderful combination, a blue tinted postcard from Italy, some lines of poetry and a stamp sending a secret message. That's what I like about PFF.
June 5, 2010 at 1:37 AM

Sheila @ A Postcard a Day said…
Whose picture was on the stamp I wonder? Could it be a protest? On the other hand I have beside me a card that arrived today from Canada, and the stamp is upside down for no apparent reason at all.
June 5, 2010 at 10:15 AM

Dorincard said…
Very artistic!
We could create, compose, encrypt, etc. our own cool postcards. Let's experiment with conveying a message or a feeling in a postcard form. Or maximum card, if possible.
:)
June 6, 2010 at 2:27 AM