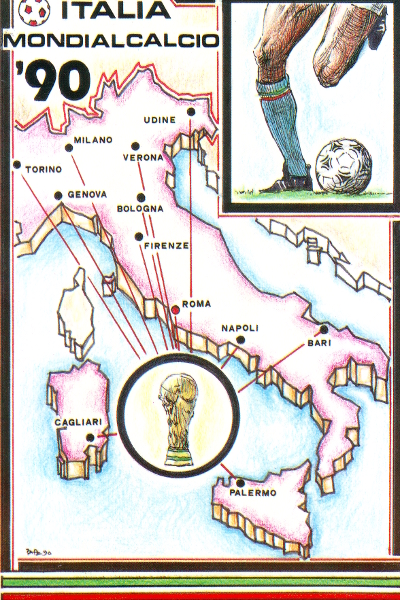 With football (or soccer) fans the world over glued to TV screens watching the World Cup in South Africa these days I thought it might be nice to take a look at a vintage 1990 FIFA World Cup postcard – the year that Italy hosted the 14th edition of the championship. Italy currently holds the title at the time of writing this post, but in 1990 they finished third, ahead of England in fourth place, with Germany beating Argentina for the title in the final.

This uncirculated souvenir postcard was issued by the publishers R.A.I.I. and is, curiously, printed on self-adhesive paper. It features the legs of an Italian player with distinctive blue socks – the team is nicknamed Gli Azzurri in Italian after the blue colour of their kit!

The 1990 World Cup is one that I seem to remember particularly well. I was still living in the UK in those days and watched the coverage of the championship on the BBC. The opening title sequence they used at the beginning of Italia '90 World Cup coverage featured Luciano Pavarotti's performance of 'Nessun Dorma' from Puccini's final opera 'Turandot', which turned Italy's Big Luciano from an opera star into a pop star overnight and brought the previously somewhat elitist world of opera to a wider audience. The track was even a hit in the UK singles chart at the time!

Watch the opening sequence from the BBC again below or click here to watch it on YouTube.

Dorincard said…
Geographically-educational postcard, but a definitory, representative postcard for that event would have been an action image from a game, with the most impressive player from that World Cup.
June 18, 2010 at 6:21 PM

Beth Niquette said…
This is the perfect postcard for today! Woohoo! May the best team win. And what an interesting post.

dakotaboo said…
Great world cup postcard - I've prepared myself for tonight by watching the Germany game during my lunch break, and the 2nd half of the USA game after work - both great games. Just 2 hours until the England match kicks off.
June 18, 2010 at 6:30 PM

Joy said…
I don't think the BBC has every topped that title sequence. Great card to have; self adhesive sounds like a competitor for Panini:-)
June 18, 2010 at 7:50 PM

Mary said…
I was in France, Belgium and England during the 1998 world cup. You never knew when you might run into a band of roving fans, in their respective colors/outfits. The Dutch and Brazilians were particularly memorable. Fun and interesting post - thanks!
June 19, 2010 at 12:47 AM

Linda said…
Fun composition on the FIFA card! And thanks for the history of the Pavarotti breakthrough to a wider audience. Didn't know he performed that year at the big event.
June 21, 2010 at 5:56 AM