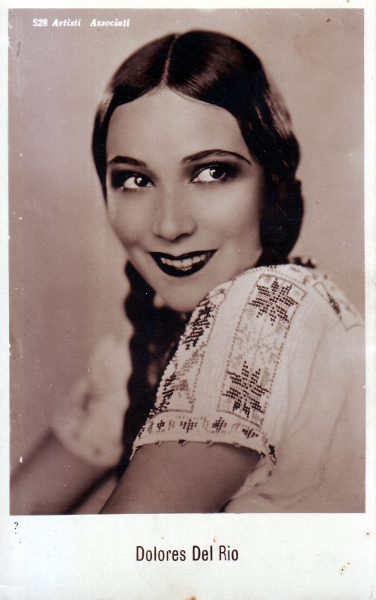 I'm reading a fascinating biography of Orson Welles at the moment by David Thomson called Rosebud. One of those little pieces of Hollywood gossip that seems to have passed me by and I discovered through reading this book was the fact that for a period early on in Welles' film career, he had dated Mexican actress Dolores Del Río. This reminded me of this lovely Italian postcard featuring Del Río in which she looks particularly stunning – she has a timeless beauty that transcends fashion or different eras, although she is often described as the archetypal Art Deco model.

This is an uncirculated postcard printed by G.B. Falci, a Milan-based company. The image features Del Río as she appeared in the 1928 film Ramona in which she took the title role. It bears a photo credit to Associati Artisti, who were presumably the Italian distributors of the film (and not to be confused with Associated Artists Productions which existed much later in Hollywood from 1953 to 1958). Given the slight time lag between release and international distribution, I would guess that this card was probably issued in the early 1930s.

Born María de los Dolores Asúnsolo y López Negrete in 1905 and a veteran of the silent era and the Golden Age of Hollywood movies, Del Río had suffered somewhat in the crossover into talkies when she found herself suddenly relegated to playing racial stereotypes and met prejudice because of her accent. Throughout the 1940s and 1950s, however, she made a triumphant return to the country of her birth and became Mexico's most important actress working with some of the finest directors in the country. A victim of McCarthyism, she was denied entry back into the States for many years. When she finally returned to Hollywood it was alongside Elvis Presley in one of the king's better movies - the 1960 western Flaming Star directed by Don Siegel. Her final film role saw her starring opposite Anthony Quinn in The Children of Sanchez in 1978, only five years before her death in 1983. In 2005, on the centenary of her birth, her ashes were transfered to the Rotunda of Illustrious Persons in Mexico City.

Whilst researching this post I stumbled upon this wonderful slide show accompanied by Dolores Del Río singing the song Ramona which was written for the film. Whilst it was never actually used in the movie, the actress performed it during promotional appearances for the film. Watch it below or click here to watch in on YouTube.

Paul van Yperen said…
Dolores del Rio was gorgeous. A very nice postcard. Do you know the version of Ramona by the Blue Diamonds? It's a kind of national anthem in my country. Happy PFF.
June 25, 2010 at 10:18 PM

Funoldhag said…
What a beautiful woman. I can remember her or hearing about her. Listened to her singing Ramona and she had a beautiful voice, too.
June 26, 2010 at 12:33 AM

Gemma Wiseman said…
Incredible story to complement this postcard! A wonderful post!
June 26, 2010 at 1:21 AM

Beth Niquette said…
Wow! I LOVE this post! What a lovely woman.