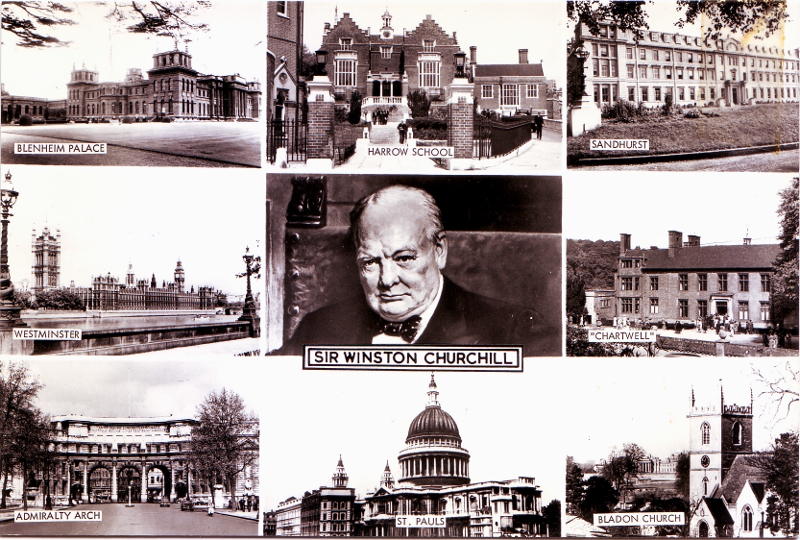 On the day following the General Election in the United Kingdom and with things still unclear as to who will govern the country I thought I'd take a closer look at this vintage 1960s postcard featuring one of the country's most famous Prime Ministers - Sir Winston Churchill.

This real photograph postcard is uncirculated, but was certainly issued after his death in 1965 as one of the vignettes highlighting important locations in the statesman's life features “Bladon Church”. Churchill was buried in the family plot at St Martin's Church, in the village of Bladon, not far from his birthplace at Blenheim Palace, which is the first of the images on this postcard. The state funeral service was held at the far more ostentatious setting of St Paul's Cathedral. The postcard is a potted biography of sorts - his school days at Harrow School are followed by those at the Royal Military College, Sandhurst (where, incidentally, he struggled to pass the entrance exams and was accepted only on his third attempt). His years as Prime Minister from 1940 to 1945 and again from 1951 to 1955 are represented by the Palace of Westminster, whilst his retirement and final years are depicted through his country home in Chartwell. Churchill also served as First Lord of the Admiralty in both the First and Second World Wars, living in Admiralty House during those years, which I assume is the reason for the inclusion of Admiralty Arch.

The postcard is stamped Frith's Series Reigate on the reverse and was published by Francis Frith & Co., a true giant in the vintage postcards world. The photographic views publishing company was first established in 1859 by Francis Frith, a British photographer and Quaker minister who had made his name with photographs he had taken on his travels in the Middle East. He then embarked upon an extraordinarily ambitious project – to photograph every town and village in the United Kingdom, particularly those of historic interest. Whilst he initially took the photos himself, he eventually hired others until Frith became one of the largest photographic studios in the world. From the early 1890's the company focused primarily on postcard production, with his sons taking over the business after Francis’ death in 1898.

When the company eventually closed for good in 1970, there were serious concerns about the future of the vast photographic archive. Help came initially in the unlikely shape of the tobacco company Rothmans who bought and saved the collection. In 1977 it was sold again, this time to John Buck who formed the present day company - The Francis Frith Collection - which continues to publish photographs from the Frith archives to this day.

Paul van Yperen said…
Thanks for sharing the interesting information about the Frith postcards. I enjoyed your post. Happy PFF.
May 7, 2010 at 7:45 PM

Snap said…
Great card for the day after the election! Lots of interesting information here, too! Thank you! Happy PFF!
May 7, 2010 at 9:04 PM

MuseSwings said…
Very interesting information about the Frith postcards!
May 7, 2010 at 10:22 PM

maryt/theteach said…
A Wonderful card representing a wonderful politician! Thanks for all the info! Happy PFF! :)
May 7, 2010 at 10:28 PM

Postcardy said…
I wonder how close Frith came to photographing every town and village in the United Kingdom.
May 7, 2010 at 11:27 PM

Lyneen said…
Interesting postcard honoring Sir Winston Churchill... the information on the Firth postcards is welcome. I am going to keep my eye out for them in my treasure hunts. PFF, thanks for sharing.
May 8, 2010 at 7:26 PM

Thimbles of the World said…
Hello,

I am a thimbles' collector from Poland and I would like to invite you
to visit a blog of My Thimble Collection at http://mythimblecollection.blogspot.com/
and a blog of Thimbles of the World at http://thimblesoftheworld.blogspot.com/