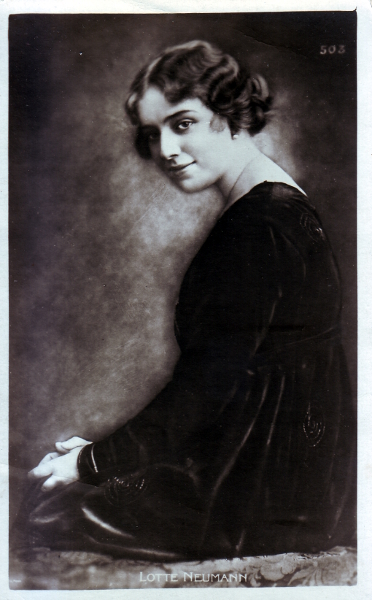 Until buying this postcard from a market stall in Rome recently, I confess that I'd never actually heard of the German actress Lotte Neumann. I fell instantly in love with this vintage postcard, however, and was intrigued by its seemingly demure subject with an almost Mona Lisa-like half smile on her lips. My attraction to the card was also the fact that it has a perfectly smooth matte surface and is almost certainly a collotype from a monotone photograph. Collotypes were very poular in Europe and the process was prized for its fine detail. In fact, the curls in her hair and the folds in her crushed velvet dress are very clear.

Whilst the card is uncirculated with a divided back, the heyday of Neumann's career as an actress during the 1920s probably dates its issue to that golden decade of postcard production. Born in Berlin in 1896 as Charlotte Pötler, Neumann is listed on IMDB as appearing in no less than 45 movies. The most famous of those films today is probably the Ernst Lubitsch-directed Romeo and Juliet in the Snow in which she played the lead.

What is particularly intriguing about her is that she was also a film producer, founding the Lotte Neumann-Film-GmbH in 1916, which lasted until 1919. Unfortunately for Lotte, her protracted divorce case, which lasted from 1929 to 1932, effectively ended her career as an actress. Her involvement with cinema continued, however, and from 1933 she worked as a screenwriter under the pseudonym C.H. Diller, marrying fellow screenwriter Walter Wassermann in 1935 with whom she would also share a professional partnership until 1944. Lotte Neumann died in 1977 in Gaißach, Germany, although I've found nothing on the Internet that fills in the gaps as to what she did for the remaining thirty odd years of her life!

Postcardy said…
It's always fun when you can find plenty of information and learn new things when researching a card.
May 15, 2010 at 12:21 AM

Paul van Yperen said…
Beautiful postcard. Is it Italian?
I recently also did a post on fascinating but sadly forgotten Lotte, check it out if you like: http://filmstarpostcards.blogspot.com/search/label/Lotte%20Neumann
May 15, 2010 at 12:35 AM

Linda said…
Fascinating, I always like to hear how women made it as writers in early Hollywood. And this one was an actress to boot. Happy PFF.
May 15, 2010 at 4:15 AM

Sheila @ A Postcard a Day said…
I have to confess I hadn't heard of her either, but she does look beautiful, almost serene, in this picture. Presumably she wasn't always serene, judging by the divorce proceedings.
May 15, 2010 at 8:37 AM

LiT Web Studio said…
Bob - YES this is an Italian card; there's an Italian copyright notice on the reverse, but no indication of publisher.
May 15, 2010 at 1:53 PM

Tussy said…
She is so beautiful, thanks for sharing info about her too.

Christine H. said…
She is so very beautiful. I have to admit that I wasn't familiar with her either, but I was very glad to learn about her here. Thanks!
May 16, 2010 at 4:14 AM

Beth Niquette said…
What a lovely woman. I'd never heard of her. Fame is indeed fleeting.