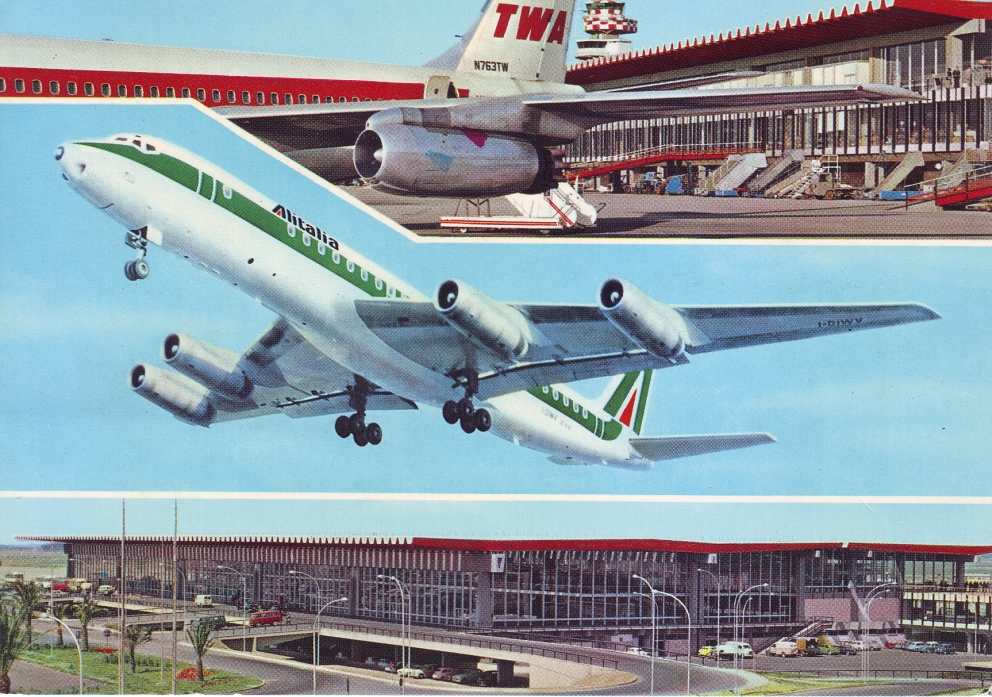 On the day that American aviator Charles A. Lindbergh successfully completed the first non-stop solo flight across the Atlantic Ocean in the monoplane Spirit of Saint Louis way back in 1927, I thought it might be fun to post a vintage aviation postcard. I'm no lover of flying but do appreciate the beauty of aeroplanes and used to spend hours glueing plastic Airfix model kits together as a kid!

This classic souvenir airport postcard features Rome's main airport Fiumicino, which in what is surely an attempt to confuse foreign travellers, also goes by the name of Leonardo da Vinci International Airport, and shows an Alitalia plane in flight and a tail view of a TWA Boeing 707 numbered N763TW sitting on the tarmac in front of the terminal. Trans World Airlines, of course, no longer exists, making this 1978 postcard even more of a curiosity, whilst Italy's flagship airline is today also struggling to survive.

Curiously, Charles Lindbergh was also a player in TWA's corporate history. When Transcontinental Air Transport (T-A-T) and Western Air Express were forced to merge into Transcontinental & Western Air (T&WA) at the insistence of the Postmaster General Walter Folger Brown, who was looking for bigger airlines to give airmail contracts, Lindbergh was one of the famous aviation pioneers who would help earn the new company the epithet "The Airline Run by Flyers" having been previously involved with Transcontinental. In fact, on October 25, 1930, the airline even offered one of the first scheduled coast to coast airline services named...wait for it... the Lindbergh Route!

This postcard also has a spectacular reverse side with a lovely commemorative postage stamp issued in 1976 to celebrate the 320th anniversary of the birth of Italian sculptor Giacomo Serpotta and featuring his work called "Fortitude" which is found in the Oratorio del Rosario di San Domenico in Palermo, Sicily. The postcard was posted in 1978 although the copyright notice is dated 1974. It was printed by Italian postcard giants Alterocca from Terni although the image is copyrighted to OTO who modestly describe themselves as “The Italian Leader in Souvenirs”! 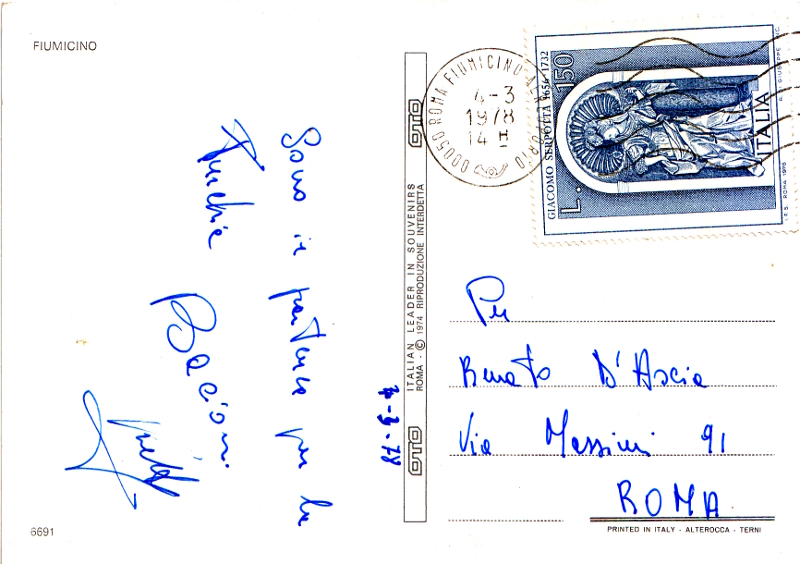 MrCachet said…
Lindbergh was always a promoter of commercial aviation, and TWA was no exception. Thanks for yhe history lesson!
May 21, 2010 at 7:22 PM

viridian said…
At first glance I thought the two planes were flying in close proximity over the airport. Look out!
May 21, 2010 at 8:54 PM

Postcardy said…
Lindbergh was originally from Minnesota. The main terminal at MSP is the Lindbergh Terminal.
May 21, 2010 at 10:29 PM

Beth Niquette said…
Thank you for the heads up about that marvelous postcard! I put in a link to your blog! Have a wonderful Friday!
May 21, 2010 at 11:18 PM

Mary said…
At least one German airline (Lufthansa) gives away postcards of their planes, on their planes. I wish more airlines did this. Passes a few minutes of a flight, writing a random postcard to a friend.
May 22, 2010 at 2:55 AM

Christine H. said…
I agree with Mary; airlines should give out postcards. It's great PR. This card brings back memories from last year. We had an early flight from Rome to Palermo, so we stayed at the Hilton at the Rome Airport. I get an inordinate amount of satisfaction from being able to walk between the airport and my hotel. Anyway, I need to go back, because I am all out of salt-packed capers.
May 23, 2010 at 1:47 AM