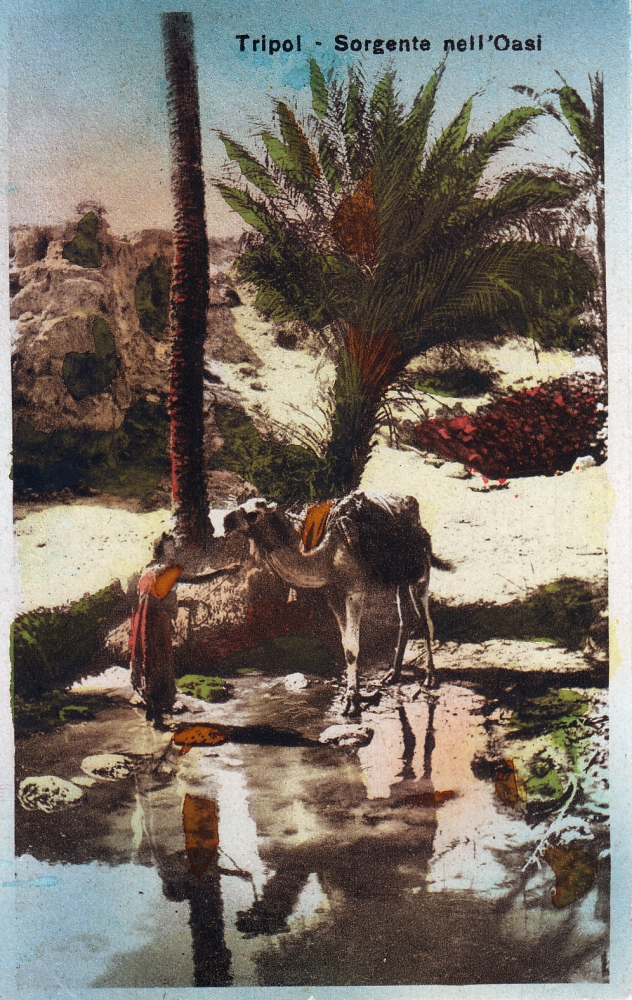 I should come clean right away with this postcard: I'm guessing somewhat about the date here! This uncirculated, divided back Libyan postcard provides very few clues to helping us date it. It was published by a company named as “Haggiag” in small print on the reverse of the card. I assume that this refers to the publishers Scialom Haggiag who were based in Tripoli, Libya and from other examples I've found on the Internet, seem to have been active through the 1920s until at least the early 1930s.

Perhaps the biggest clue, however, comes from the fact that this is an Italian – Libyan postcard, with the description of the spring in the oasis written in Italian. Libya became an Italian colony after suffering terribly at the hands of Mussolini - thousands died, not only in warfare, but also from disease and starvation before Libya was fully pacified in 1934. When Mussolini made his state visit in 1937 he bizarrely made himself "protector of Islam" and Italians were encouraged to emigrate to the colony in large numbers. Indeed, by 1939 over 12% of the total population of Libya were Italian. So once again, there's a darker tale behind what looks superficially like a quaint ethnic postcard.

The postcard seems to have been printed cheaply on thin card although the colour washes look hand painted if albeit rather crude and splotchy in their application. My personal attraction to this card initially was that it featured one of my favourite animals - a camel!
Africa Animals Ethnic Hand-tinted
First published on April 08, 2010 by LiT Web Studio

Tattered and Lost said…
Actually a quite lovely card even if they went the cheap printing route. I would love to be able to see the photo in black and white.
April 8, 2010 at 8:41 PM

Muhammad Abu Bakar said…
In Tripoli, western warplanes hit Libya for a fifth night on Thursday,but have so far failed to stop
for more details Visit
www.dunyanews.tv
March 24, 2011 at 11:39 AM