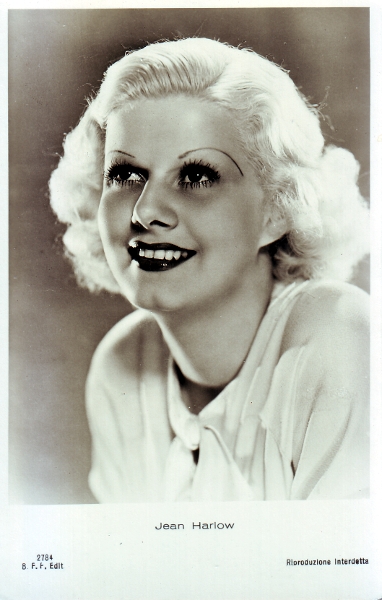 Long before Madonna and even before the legendary Marilyn Monroe, there was Jean Harlow...the original Blonde Bombshell! Sexy and funny too, she quickly became a Hollywood superstar in the 1930s and the jewel in MGM's crown. I remember my grandmother telling me about her when I was a child - in particular, she told me how shocked she had been on hearing the news of her sudden death. In fact, this gorgeous uncirculated vintage movie star postcard was issued in 1936, only a year before Harlow died at the very height of her fame aged 26. Dozens of movie roles, a troubled childhood followed by three marriages, combined with a sudden, tragic demise have all contributed to make her an archetypal Hollywood legend. Modern audiences were reminded of her most recently when Gwen Stefani portrayed her, albeit briefly, in Martin Scorsese's 2004 biopic The Aviator starring Leonardo DiCaprio as Howard Hughes.

This Italian postcard carries the name of the Florence-based postcard company Ballerini & Frattini (active from 1912 to the present day) who also distributed the real photo German-printed Ross Verlag film star postcards in Italy.

As was often the case during the dark days of Italian Fascism, the date on the back of the card uses Roman numerals and is printed as "Anno XIV" rather than "1936". It seems incredible now, but Mussolini seriously attempted to replace the Anno Domini system in those years and instead used Roman numerals with year "I" indicating the establishment of the Fascist government in 1922, making 1936 in this particular case, year XIV.

Here's a great montage of images of Jean Harlow. Click here to go to YouTube or watch below:

Tattered and Lost said…
She looks so ethereal and yet I bet her hair was horribly dry and felt like cotton. Bleached to the extreme. Talented lady, sad life.
April 9, 2010 at 8:42 PM

Joy said…
Anno XIV, I never knew that, an insight into a mind. What else do you do when you have got the trains running on time, start a new way to measure time.
April 9, 2010 at 9:20 PM

Christine H. said…
Very interesting. I didn't know she died so young. I looked at her more closely in the photos and it seems to me she actually had a very strong, almost masculine face. The hair softened it a lot, but with different hair, she would have looked entirely different.
April 9, 2010 at 10:21 PM

Sheila @ A Postcard a Day said…
I remember my grandmother telling me very much the same, but I hadn't realised just how young Jean Harlow was when she died.
April 10, 2010 at 1:04 AM

Paul van Yperen said…
An excellent post. I loved Jean in her comedies like Dinner at Eight and she is a wonderful subject voor glamorous postcards. The postcards by Ballerini are great, also the one of the 1910's with the great Italian divas. happy PFF (on Saturday).
April 10, 2010 at 2:03 PM

Music and Movie Treasures By Brenda said…
Fantastic postcard; I love vintage pieces. I always considered myself a blond but I could only dream of the bombshell part!
April 17, 2010 at 3:11 PM

Beth Niquette said…
I've heard her name, but did not know she had died so young. Tragic. What a wonderful young woman she must have been!
April 18, 2010 at 2:39 AM