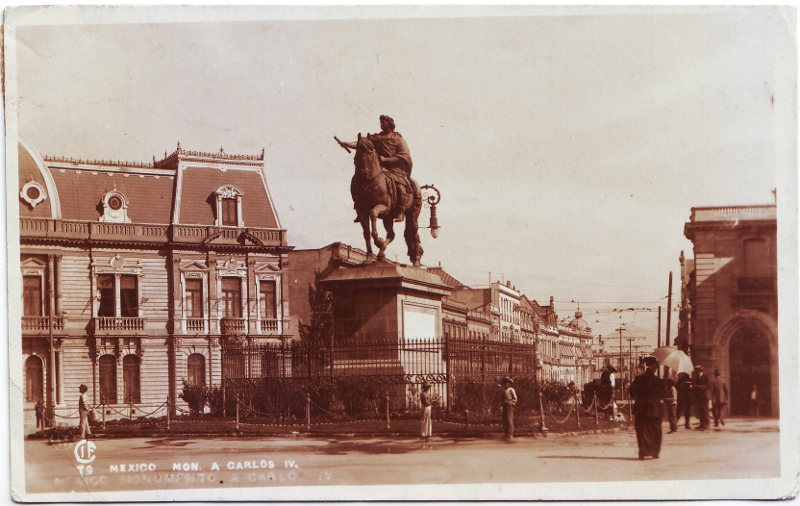 This vintage Mexican postcard from 1921 features the equestrian statue of Charles IV by sculptor Manuel Tolsá in Mexico City. Whilst today the monumental bronze known as El Caballito takes pride of place in front of The National Art Museum on Plaza Manuel Tolsá, it has been situated in various locations across the city since its inauguration in December 1803 - on occasions it even risked destruction when anti-Hispanic sentiments were running at their highest. Luckily, Lucas Alamán was able to persuade Guadalupe Victoria, the first President of Mexico, that rather than melting down the statue, it should be preserved because of its artistic merits.

El Caballito (Yellow Horse)
Originally uploaded by RightIndex
In 1852, the statue was moved from the courtyard of the ancient university where it had been protected from potential attacks, to the intersection of Paseo de la Reforma and Paseo de Bucareli, where this time it was protected by railings. This postcard would seem to show the statue in that very position as it is clearly a wide intersection, although a quick peek at Google maps today shows a dramatically different picture with glass skyscrapers. The people of Mexico City must have grown used to the presence of an equestrian statue in that location, however, for today in its place there now stands another monumental sculpture – a bright yellow metallic horse's head by renowned Mexican artist Sebastián. This sculpture is also known as El Caballito (Little Horse).

The real photograph postcard was issued by CIF, possibly using stock from another company - the name of the postcard and the logo have been handwritten rather crudely and a previous, albeit similar title, is still visible. The postage stamp was issued in 1917 and features a portrait of Mexican revolutionary Venustiano Carranza who was President of Mexico from 1917 until his death by assassination in 1920, the year before this card was posted to Rome, Italy. A great piece of history! 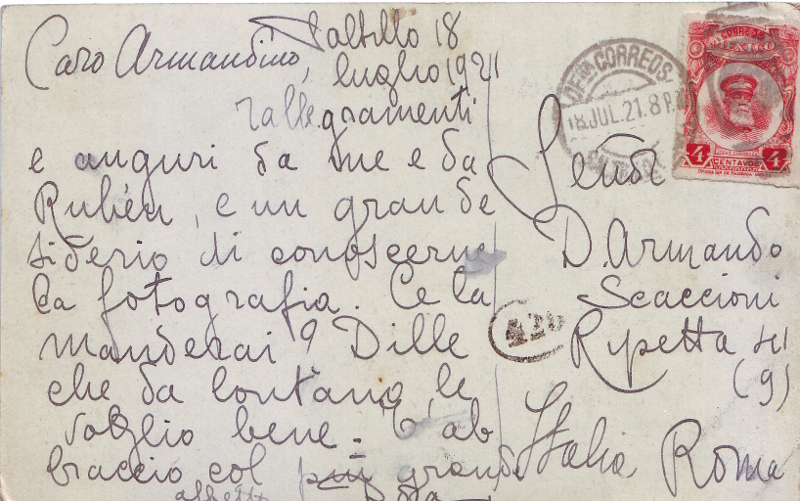 Joy said…
It is indeed a great piece of history. I love the fact that a Mexican Revolutionary is on the back of a card of a king's statue.
April 23, 2010 at 8:29 PM

Beth Niquette said…
I laughed and laughed over your comment on my blog. (Grin) And I LOVE these postcards! Wow!

Terry said…
Howdy
Happy PFF to you .
What a fabulous post .
I love learning all this great information you shared with us .
Thank you so very much.
Have a wonderful weekend.
Happy Trails
April 24, 2010 at 4:30 AM

Clytie said…
What a wonderful card - and thank you for the history! Fascinating.

Sheila @ A Postcard a Day said…
I've always thought postcards can be a wonderful source of history. You just have to look up one thing about the subject matter and you're led off on a magical trail.
April 25, 2010 at 12:10 AM