This German real photograph vintage postcard has to be one of the most moving that I own. It was produced by Photochemie, a Berlin company with their own printing plant and appears to be a bromide print judging by the overall matte surface but light, almost metallic-looking tarnishing around the edges of the central image. The theme of being forsaken on this card is a frequent one on early vintage German postcards, but more often than not they deal with the temporary separation of sweethearts, rather than death and loss.

Whilst the postcard is uncirculated and therefore undated, its divided back and the clothing give us a few clues as to when it might have been produced. Germany introduced the divided back in 1905 and from the style of the traditional clothing which looks more Austrian than German I would say that this card is no later than 1914-15 and beginning of the First World War. This is, I hasten to add however, only a guess. If anybody has any other suggestions, please drop me a line in the comments box!

The words on the card are from the second verse of the Carinthian folk song Forsaken (or rather Verlassen Bin or sometime simply Verlassen), written by Austrian composer Thomas Koschat (1845–1914) in 1862. Koschat formed the Koschat Quartet (Rudolf Traxler, Walter Fourness, Georg Haan and Clemens Fochler) and was apparently rather well known in Europe and the US where he toured extensively. Outside Europe he may not be a household name, but certainly most people will be familiar with the music for this song which was adopted for James Montgomery's hymn The Lord is My Shepherd.

Thanks to the Hymn Studies blog I managed to find a translation of the original folk song which fits the image on the card perfectly .

Forsaken, forsaken, forsaken am I;
Like the stone in the causeway, my buried hopes lie;
I go to the churchyard, My eyes filled with tears;
And kneeling I weep there, Oh, my love, loved for years.

A mound in the churchyard, that blossoms hang o'er;
It is there my love sleepeth, to waken no more;
'Tis there all my footsteps, my passions all lead;
And there my heart turneth, I'm forsaken indeed. 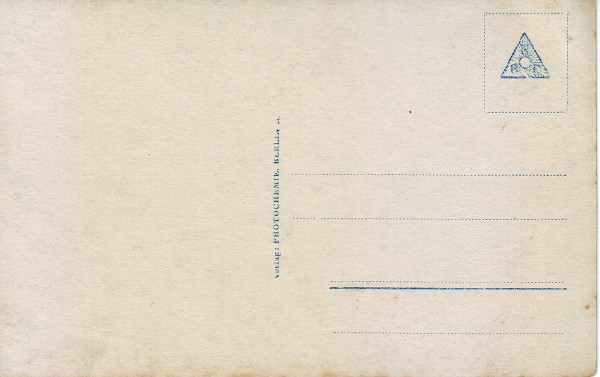 dandelionlady said…
I'm amazed at your insight into postcards! I'm sure I'm going to learn a lot from reading your blog. It amazes me how many different kinds of postcards there are out there, even funeral ones. Thanks for visiting my blog as well, I'm looking forward to continuing contributing to Postcard Friday!
January 29, 2010 at 7:49 PM

Postcardy said…
I'm glad you researched the postcard. It makes the card so much more interesting.
January 29, 2010 at 8:59 PM

Beth Niquette said…
This is a moving post. Thank you for the insight about the postcard. Poignant.

Sheila @ A Postcard a Day said…
I love being able to find things out by research! Do you know anything of German? The words shown on the video look different from the German I learnt at school.
January 30, 2010 at 4:08 PM

Snap said…
BEautiful post and thank you for all the research. I enjoy learning something new. Beautiful music. Happy PFF.
January 30, 2010 at 4:08 PM

AnitaNH said…
That cool birch bark chair attracted my attention right away. So much fun to unearth an interesting story using an image as the starting point!
January 31, 2010 at 3:02 PM

Marie Reed said…
What an amazingly powerful post. I've istened to the song thrice so far. To answer Sheila's question...The song isn't written in high German. It's a dialect:) That's why the words look so odd!
February 3, 2010 at 11:21 AM

LiT Web Studio said…
thanks everyone for your comments and to marie, for her knowledge of german!...i studied german at school for three years but sadly ich habe alles vergessen!
February 3, 2010 at 11:45 AM