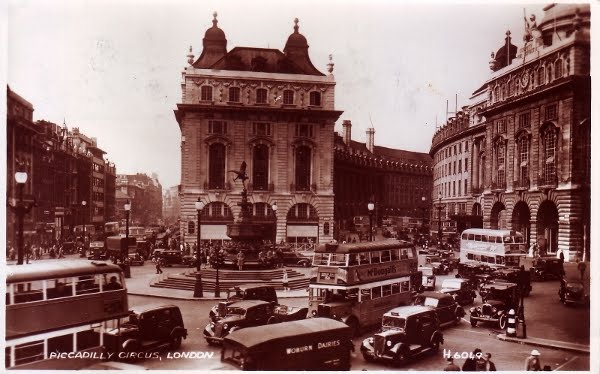 When I was a child growing up in the UK, whenever a place would get particularly busy or crowded it wouldn't be too long before an adult would exclaim: It's like Piccadilly Circus in here! This photograph taken almost twenty years before my birth shows just how busy a thoroughfare it really was even back in the 1950s. First built in 1819 to connect Regent Street with the major shopping street of Piccadilly (both visible in this image), with its memorial fountain and aluminium statue of Anteros, more popularly referred to as Eros, added in 1892-93, Piccadilly Circus is now one of London's most recognisable landmarks. The traditional double-decker London Buses are, of course, instantly recognisable too and the central bus is advertising another British institution - McDougall’s Self-Rising Flour!

This sepia toned real photograph postcard was printed with a high gloss finish by postcard publishing giant Valentine & Sons Ltd. and on the reverse features its classic "Valentine's" logo with the initial V and two globes indicating their once worldwide business (they had long since sold their interests outside of Great Britain back in 1923). As was often the case with their photographic cards, this image has been named and numbered on the front by hand.

The postmark on this card is hard to read but the year would seem to end in a zero, which I assume makes this a late usage of a 2 ½ d (old pence) George VI definitive postage stamp which was in use from 1937 - 1947. 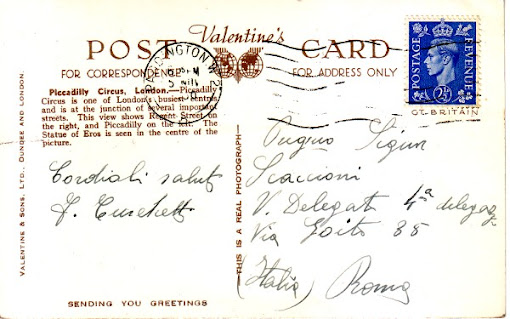 Whilst doing a bit of research about this postcard I came across this wonderful film - Journey by a London Bus in 1950 - a time-capsule movie which fits this post beautifully. Watch it below or click here to watch on YouTube!

Aimee said…
Wonderful card! I've heard the term Piccadilly Circus before, but I didn't know what it referred to.
January 15, 2010 at 7:57 PM

Christine H. said…
I love postcards of old cars and buses. This one is wonderful and the video was a hoot...what with cheerful conductors and orderly passengers. The modern sequel might include some rowdy soccer fans.
January 15, 2010 at 10:10 PM

Terry said…
Howdy
Happy PFF to you .
What a fun post .
The utube video clip was an excellent bonus !
I really enjoyed seeing your card today .
Thank you for sharing this awesome moment in time.
Have a fantastic weekend.
Happy Trails
January 16, 2010 at 12:14 AM

Lyneen said…
great real photo postcard. love all the vehicles in it. It sure looks like a circus! THANKS for sharing, PFF!
January 17, 2010 at 11:53 AM

Marie Reed said…
What a divine little gem of a film! I'm becoming a crotchety old lady! I don't really like going into the city anymore (when it's like Piccadilly Circus:)
January 19, 2010 at 1:26 PM