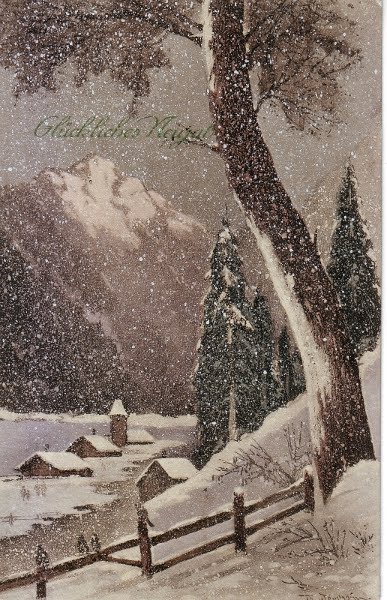 This gorgeous winter scene with its Happy New Year message is my Christmas postcard to you all for this year. The postcard was issued by Paul Trabert of Leipzig (shown here by the initials P.T.L) who was operational from 1901 until at least the late 1960s. He set up his family-run business with its own publishing department Art de Vienne and was also a contract collotype printer for other firms until end of the First World War. This postcard would also appear to be a collotype or some other kind of high quality printing technique, whilst the snow flurries seems to have been finished by hand as the matte surface is slightly raised on the snow flakes. The card is artist signed but the signature isn't clear.

It was posted to "Volosca" (or rather "Volosko" – the spelling of the address is Italian on the card, as is the message) which is now found in modern day Croatia, although when this card was posted it would have been part of the district of Istria in the Austrian Littoral. This popular resort on the Austrian Riviera was a crown land (Kronland) within the Austrian Empire from 1813 till 1867 and subsequently part of the Austro-Hungarian Empire or Dual Monarchy from 1867 to 1918. The area has always been linguistically and ethnically very mixed with Italians, Slovenes, Croats, Germans, Furlans, and Istriots being the main ethnic groups - its history is a long and complicated one and this postcard is evidence of this!

There isn't much left of the postage stamp, but we can just about make out the beginning of “Magyar Kir Posta” (meaning "Hungarian Royal Postage"), and with the currency “Filler” and the value of 5 overprinted in black we have just enough information to identify the stamp as an Hungarian postage stamp issued in 1900 which featured the Turul, the mythical bird of the Magyars (not visible) flying over the royal Hungarian crown (visible). This postcard must have been posted from neighbouring Kingdom of Hungary, therefore, as the Austro-Hungarian issues I believe, were issued in Heller currency. This is a thorny area, however, so please do correct me below in the comments if anybody knows better! 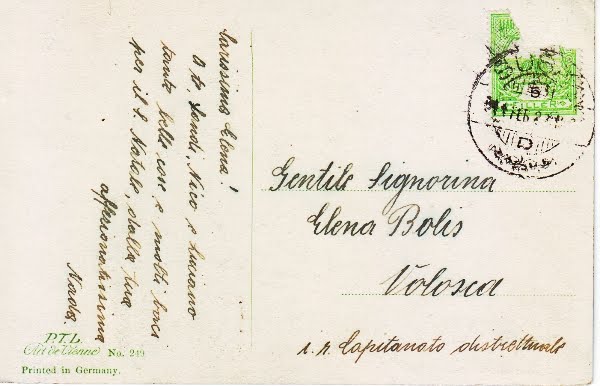 Christine said…
Fascinating history and the card is particularly beautiful. It almost has an Asian flavor, as if Hokusai were standing over the artist giving pointers.
December 18, 2009 at 5:50 PM

Beth Niquette said…
There is something about this posticard....I love it. Thank you so much for sharing--it touched my heart this morning.

AnitaNH said…
Beautiful card and lovely writing on the back. Happy PFF and Happy Holidays!
December 18, 2009 at 7:02 PM

Beth Niquette said…
Hello again! Thank you for your lovely comment on my elegant curl of bark. I tried to get to your poem, but my computer, alas, would not let me. I'd love to read it--would you be willing to sent it to me? I love bark and trees too--and I LOVE poetry.

Postcardy said…
That's a lovely snow scene. I liked reading the historical tidbits too. I find all the shifting country boundaries very confusing. I asked Santa for a new atlas!
December 18, 2009 at 11:22 PM

Sheila said…
It's an especially attractive card, somehow conveying a great perspective - almost 3d. Unfortunately that part of history and geography has always escaped me. :)
December 19, 2009 at 9:22 PM