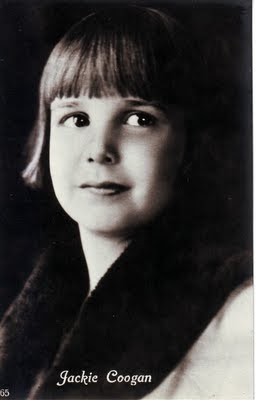 After the popularity of my recent post about child star Shirley Temple I thought I'd share another vintage film star postcard with you here featuring yet another child actor - Jackie Coogan. The film stills of him alongside Charlie Chaplin in The Kid are some of cinema's most lasting and iconic images, whilst his later appearance as Uncle Fester in 62 episodes of the classic US TV show The Addams Family in the 1960s assured his place in the annals of television history. He was also instrumental in helping to get the California Child Actor's Bill passed into law - it is also also known as the Coogan Act or Coogan Bill - which ensures that the earnings of child stars are safeguarded until they enter adulthood and cannot be squandered away by reckless parents or guardians (as indeed happened in the case of Coogan). In this photograph Jackie Coogan is sporting his trademark pageboy haircut - he would be shorn of his locks in the 1927 movie Johnny Get Your Hair Cut, in a clever gimmick used to both sell the movie and also mark the actor's growing maturity at the ripe old age of twelve! The uncirculated real photo postcard was issued by the Milan-based publisher A. Traldi (Ed. A. Traldi Milano). It is Traldi's lovely - and for the times, retro - Art Nouveau logo on the reverse of the card which also helps date it with some precision to 1929 at the latest, for their logo changed completely in 1930. 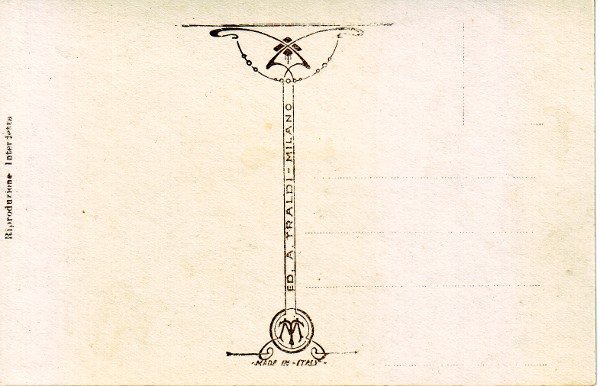 Sheila @ A Postcard a Day said…
What a coincidence! I've just been looking up the Addams family for some images. I had no idea Jackie Coogan used to look like this.
December 11, 2009 at 11:53 PM

MrCachet said…
GREAT card! I've in the past explained that although my images that I post on PFF are NOT postcards, they do indeed have stamps on them. Most of them have never traveled the mail stream, but I do primarily create mail art in a very loose sense of the word. The Nutcracker is properly called a First Day Cover. I have a number of examples of mail art on my blog, and will post some examples of that variety over the weeks ahead.
December 12, 2009 at 12:33 AM

Christine said…
He is simply adorable. And thank goodness for the Jackie Coogan Act!
December 14, 2009 at 1:58 AM