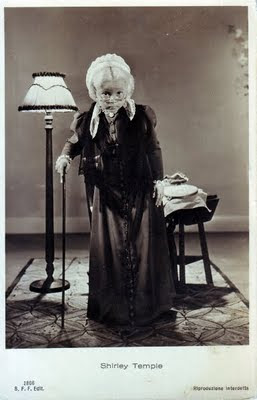 This lovely uncirculated vintage movie star postcard features a heavily disguised Shirley Temple in a scene from the 1935 Fox musical Curly Top. Directed by Irving Cummings, this film was another hit movie starring the then seven year old Hollywood star and was a Shirley Temple vehicle all the way. This particular scene is the moment in which she sings When I Grow Up (lyrics by Edward Heymand and music by Ray Henderson) dressed as an elderly woman who suddenly gets up and tap dances at the end of the number! The song itself also went on to become a hit of the day and sold thousands of sheet music copies.

When I get very very old I'll stay at home all day,
But I haven't quite made up my mind, it's much too far away.
I think that I would like to be like the lady on the wall,
She looks so nice and comfy in her rocking chair 'n' all.
With that little cap upon her head she looks real pretty, too,
I like her long and funny dress, I like her hair, don't you?
It must be oh, so quiet you can hear the tick of the clock,
But it must be fun to have nothing to do but rock, and rock, and rock.

This Italian postcard was printed by the Florence postcard company Ballerini & Frattini (1912 - the present day) and issued in 1936 a year after the film's original US release.

As an interesting footnote, the date on the back of the card is "Anno XIV" rather than the more conventional "1936", a reminder that this card was issued during Italy's darkest period - that of Italian Fascism. There was a serious attempt to displace the Anno Domini system in those years by using Roman numerals to denote the number of years since the establishment of the Fascist government in 1922. Therefore, in this case, 1936 was year XIV.

Click here to watch a video clip of Curly Top. Her appearance dressed as she appears in this postcard is at approximately 3.08 minutes.

Christine said…
Ah, Shirley Temple was and is wonderful. And thanks for including that clip. Great way to start out the day.
November 13, 2009 at 5:40 PM

Sherrie said…
Hi!
Great postcard! I would have never known that was Shirley Temple. Have a great day!

Snap said…
Oh, my. I would have never known that that is Shirley Temple! What a wonderful, fun card. Thanks for the information,too. Happy PFF
November 13, 2009 at 5:43 PM

AnitaNH said…
Interesting about the date. Thanks for visiting and happy PFF!
November 13, 2009 at 7:33 PM

Postcardy said…
That's an interesting postcard of Shirley Temple. I wasn't aware of the year numbering system.
November 14, 2009 at 3:44 AM

Mary said…
Oh, I remember that movie so well. She really was quite spectacular. Does any body else remember Shirley Temple hour on Sundays, early 60s perhaps? Thanks for the memory and the link to the clip.
November 14, 2009 at 5:40 AM