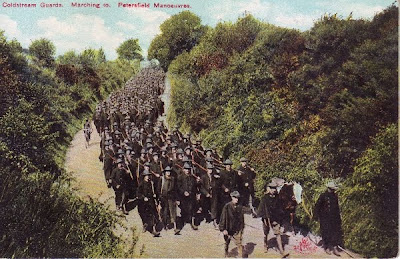 Lest we forget...Today, 11th November, is Armistice Day so I thought this image of the marching Coldstream Guards on their way to Petersfield Manoeuvres would be a timely addition to the blog.

Her Majesty's Coldstream Regiment of Foot Guards is actually the oldest regiment in the British Regular Army which has seen continuous active service since its founding in 1650 by General George Monck at Coldstream in Scotland. Whilst not so instantly identifiable in this image, they are known the world over by being one of the Queen's five foot guard regiments that wear the striking red uniforms and distinctive bearskin hats - they've surely been photographed whilst standing sentry by every tourist who ever visited London!

This uncirculated postcard was published by Max Ettlinger & Co. Ltd. as part of Series 4841 which appears to have been dedicated to the Coldstream Guards and was issued under the Royal Series name. They published many real photograph hand coloured postcards, but this particular example looks to be a printed card, although without the use of a magnifying glass the effect looks very much like a hand-tinted example. Certainly the title of the scene and the company logo in red on the front of the card were hand stamped. There is also a slightly textured surface over the card - a barely perceptible stippled effect.

Like most of their postcards, this was printed in Germany and is a perfect example from the so-called Golden Age of postcard production. The First World War would effectively bring that period to an end and Max Ettlinger & Co. Ltd. would close shop in 1916.
Hand-tinted Military People
First published on November 11, 2009 by LiT Web Studio