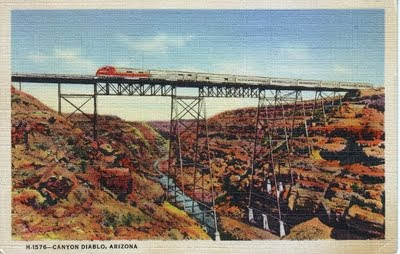 As somebody who has lived their entire life in Europe, I'm fascinated by the elegance and romanticism of US streamliner trains, so found this Fred Harvey Trading Co. postcard of a Sante Fe Streamliner particularly irresistible.

The Fred Harvey Trading Co. actually started life in 1878 as a restaurant, then hotel chain, with quality establishments across the Southwest. (The Harvey Girls, the 1946 MGM musical, is about Fred Harvey's famous Harvey House restaurants.) By 1897 Fred Harvey had also acquired the news stands for the Atchison, Topeka and Santa Fe Railway company and begun publishing large numbers of postcards, initially aimed at promoting its route to the Grand Canyon and naturally, the Fred Harvey hotels within the National Park.

When Fred Harvey died in 1901 the surviving company contracted out their postcard production with the Detroit Publishing Company, and would continue to do so until 1932. Luckily for us, these cards are easily identifiable today because they included an "H" prefix before the series numbers on the front of the card, as is the case with this card. When Detroit closed in 1936, Curt Teich took over printing the cards.

However, this uncirculated card is still slightly difficult to date, so we need to look for clues. The bridge over Canyon Diablo in Arizona on the card is the early version of the bridge that first opened in 1882 after a series of engineering mishaps - the bridge was built pre-assembled off-site and due to miscalculations was initially too short to span the canyon - rather than the present modern bridge, which was built in 1930.

The train, on the other hand, is the EMC E1, a streamlined diesel electric locomotive, decked out in the now-famous "Warbonnet" paint scheme devised by Leland Knickerbocker to echo Native American ceremonial headdress - the red "bonnet" wraps around the front of the train, bordered by a yellow stripe and black pinstripe, with the remainder of the train either painted silver or made up of stainless steel panels. These trains were built between 1937–1938. Clearly the newer train has been added to an older photograph of the bridge! 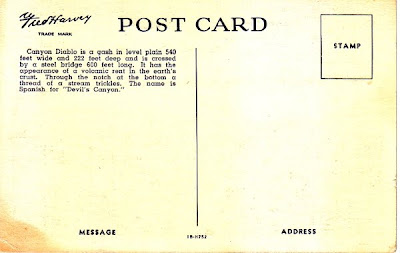 But the final clue that helps solve the mystery is that this is a fabulous example of a postcard printed on Linen Card Stock - a slightly heavier paper stock embossed with a linen-finish texture. Chicago-based Curt Teich perfected this technique. Whilst the front of the card still bears the Fred Harvey/Detroit series number, the back of the card carries the Curt Teich serial no. 1B-H752, which dates it to 1941.

Postcardy said…
That's an interesting post. I never would have suspected that a newer engine was used with an older bridge.
October 9, 2009 at 2:31 PM

Snap said…
Wonderful colorful card (I love trains) and great information. I have a friend whose Aunt was a Fred Harvey Girl! (Aging ourselves!!)
October 9, 2009 at 3:48 PM

Christine H. said…
You are a genuine sleuth. I am so impressed that you figured out that the bridge and the train were from different times. I also think it's funny for a European to be fascinated with American trains. I think it's supposed to be the other way around.
October 9, 2009 at 4:55 PM

LiT Web Studio said…
...I even found an identical card on the Internet - same series number etc. - but with a stream train going across the bridge instead!
October 9, 2009 at 5:17 PM

fortuitous faery said…
amazing! but even more amazing is he diabolical-sounding name of the canyon! :P
October 9, 2009 at 6:16 PM

Sheila @ A Postcard a Day said…
It does look a rather rickety rackety bridge for such a train. I don't think I'd be looking out of the windows as I travelled over it.
October 9, 2009 at 8:51 PM

steviewren said…
This is a great piece of postcard forensics! You are the CSI master of the postcarding world in my humble opinion.
October 9, 2009 at 11:06 PM

Marie Reed said…
Rickety Rackety is the perfect description! I would certainly be holding my breath and crossing my fingers while crossing Canyon Diablo!
October 10, 2009 at 3:32 PM