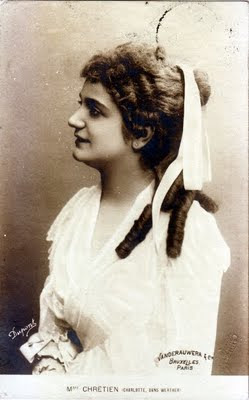 Portrait postcards of opera stars were extremely popular in the early 1900s and although many of the names will only be familiar to opera-buffs nowadays, they are still charming indicators of how fashions change and provide an important historic and cultural record. This undivided back Belgian postcard was published by Paris and Brussels-based printers Vanderauwera & Cie (who also appear to have published pamphlets) and features the French operatic soprano Alba Chrétien-Vaguet in a portrait by Dupont.

The young Alba first studied the piano at the Paris Conservatoire and began her operatic career at the historic Belgian opera house La Monnaie in Brussels in 1891. This card, in fact, shows her in the role of Charlotte in Werther, which ran for 20 performances over the 1892-1893 season at La Monnaie, and identifies her by her maiden name Mme. Chrétien - she would marry Albert Vaguet, a tenor of the Opéra de Paris, the following year in 1894.

The card has a matte rather than glossy finish and is probably a collotype print from a monochrome photograph. The original photograph bore an embossed logo for Dupont which is just visible to the right of the printer's credit in the bottom right hand corner of the image. 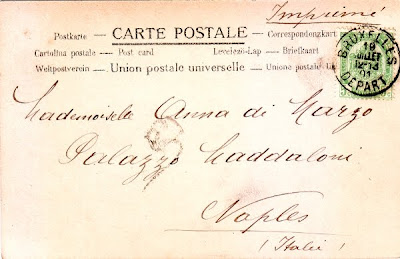 Interestingly, the card was not actually posted until 1901 and being an undivided back card contains no message, just the address. Whilst I've been unable to uncover anything about the recipient, a certain Anna di Marzo, the address does excite some curiosity - Palazzo Maddaloni, in full Palazzo Carafa di Maddaloni, is a well known historic Baroque palace in Naples, which after having faced the threat of demolition for years, has finally been restored.

Christine said…
Wow, this is amazing on so many counts. I am fascinated by old opera stars. I wish there were more recordings of these singers. She is particularly lovely too. And the mysterious recipient...I am dying to know more.
October 16, 2009 at 8:44 PM

Snap said…
Lovely card and how wonderful that they address still exists!
October 17, 2009 at 3:00 AM

Evelyn Yvonne Theriault said…
My husband's great grandfather was an opera singer in Bologna, Italy and I'm always hoping that I'll find one of these cards!
Evelyn in Montreal
October 17, 2009 at 3:37 AM

Beth Niquette said…
What a lovely woman. I am fascinated with postcard portraits printed around the turn of the century. They can be indeed mysterious. Happy PFF!
October 17, 2009 at 6:48 AM

Sheila said…
It's a very attractive card. I love the detective work involved in dating and finding out more about cards like this.
October 18, 2009 at 3:41 PM