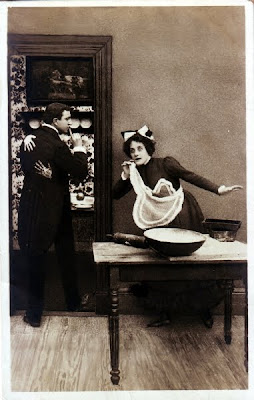 I picked up this little gem from the so-called Golden Age of postcard production at a market in Rome. This comic postcard depicts a classic "upstairs downstairs" innuendo-laden scenario with the butler leaving the kitchen after a secret tryst with the cook - or not so secret, as it turns out! The dramatic staging of the tableau has very much the air of a still from a silent movie, yet with the whole story told in one image. The card has a matte rather than glossy finish and is, I believe, a collotype print from a monochrome photograph (which is quite possible given that this method was popular in early European postcard production).

This is an uncirculated card with an undivided back, but there are several clues that help us date its production. The top left hand corner of the back of the card includes a space to add a posting date and sender, with the date space beginning "190..." which puts the card in the early 1900s. Whilst Great Britain was the first to adopt the "divided back" postcard in 1902, Italy issued its first divided back private postcard in 1906, with the Universal Postal Union allowing their use internationally with effect from 1 October 1907. Finally, the words Union Postale Universelle confirm the card as dating approximately from the period 1901 to 1907.

The publisher is identified as "ASC" and is mentioned just above the copyright notice below the address space. 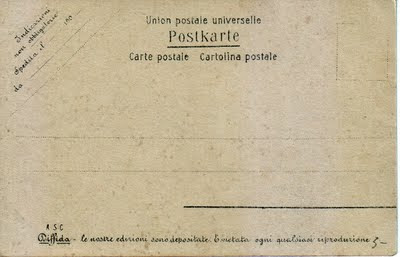 Postcardy said…
I wonder if they had series of scenes showing more stages of the scene.
October 2, 2009 at 2:16 PM

Christine H. said…
This is lovely and funny too. Thanks for posting the back of the card too; there's something especially nice about it.
October 2, 2009 at 4:15 PM

Sherrie said…
Hi!
Beautiful postcard! It really looks like a shot from a silent movie! Have a great day!

viridian said…
Yes it does look like a still from a silent movie. The white handprints are actually pretty spooky.
October 2, 2009 at 7:08 PM

Robin said…
What a great postcard.....
Thanks for sharing

Carole said…
That is a fun card!

And you're right about the one I posted....I hadn't even noticed the darker corners until you said something. I bet you're right. The answer was 'yes'.
October 3, 2009 at 1:44 AM

Beth Niquette said…
That is a FUNNY postcard! I guess intrigues of that sort will never grow old. Truly a wonderful find. Happy PFF!
October 3, 2009 at 5:01 PM

Chris Overstreet said…
Postcards like this that I've seen before were frequently one of a tableau of four or eight different poses; might be fun to try to track down others.
October 3, 2009 at 7:47 PM

LiT Web Studio said…
many thanks for all your comments...glad you all enjoyed this card so much and for giving me such a huge PFF welcome!
October 4, 2009 at 12:44 PM

Marie Reed said…
Debssssssssss! Well how in the world did I miss this PFF post. I've been a bit of a flibbertigibbet lately. This is an uproariously funny card! I personally have always wanted to have a secret tryst with the cook....especially one who makes a mean rack of lamb;)
October 7, 2009 at 1:17 PM