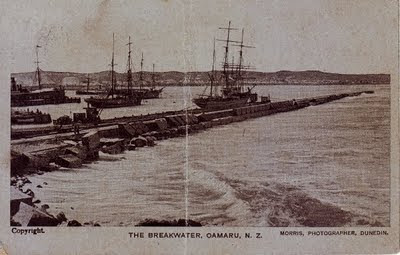 One of the joys of collecting postcards is in uncovering the stories of the people in them or the far-way places pictured. Oamaru, 120 kilometres north of Dunedin on the coast of New Zealand's South Island was familiar to me as the real-life location of many of Janet Frames' novels - Waimaru from her first book in particular - whilst Dunedin was the title of a novel by Shena Mackay that I read many years ago.

Oamaru Harbour was designed by the architect Thomas Forrester and still survives today as one of the best examples of a deep water Victorian-Edwardian port and is even registered as a site of National Significance with the New Zealand Historic Places Trust. When the earliest European settlers arrived in Oamaru it became notorious as one of the most dangerous anchorages on the island with over 20 shipwrecks recorded there between 1860 and 1875. The Oamaru Harbour Board was formed in 1874 and by 1884 it had finished the breakwater.

The photograph is copyright to the Morris studio of Dunedin. The Morris name would seem to have been synonymous with photography in Dunedin at the end of the 1800s with its most famous local photographer John Richard Morris being one of 5 brothers, 4 of whom became photographers! He was elected president of the association of professional photographers and had a chain of studios, including one with Robert Clifford - Clifford, Morris & Co - with his final address being that of George Street, Dunedin in 1915. J R Morris died in the influenza epidemic of 1919, however, which brings me to one of main things that attracted me to this card when I first saw it...

Whilst this postcard may not be in the best possible condition I was immediately struck by it and knew I wanted it for my collection because of one curious detail - although it was printed in New Zealand and features an Oamaru landmark, it was actually posted in Italy in 1928 and bears a Procida - Napoli cancellation!

How this card made its way to Italy in the late 1920s, is surely another tale to be told, but sadly we'll probably never know... 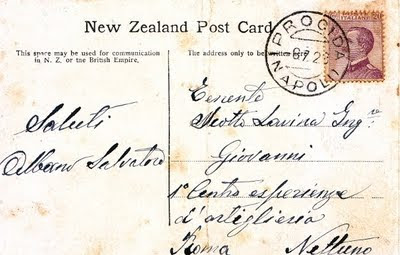 Christine said…
The original buyer of this postcard was probably did what I do all the time. He intended to send it from New Zealand, but never got around to it and carried it home with him on the ship. In any case, it's wonderful!
October 30, 2009 at 8:16 PM

Sheila said…
I think perhaps the story of how the card came to be written and posted in Italy could be every bit as intriguing as the rest of the story. I love the facts and possible stories coming from these old cards.
October 30, 2009 at 8:46 PM

Postcardy said…
I am guessing that one or both of the people involved was a postcard collector.
October 30, 2009 at 9:55 PM

Beth Niquette said…
What a wonderful story! If only we knew all the interesting facts and stories which must follow the postcards we find...
October 31, 2009 at 3:56 PM

Beth Niquette said…
If only this postcard could talk! Thank you for sharing this rare gem, and for all the history behind it. Wonderful! Happy PFF!
November 13, 2009 at 9:00 PM