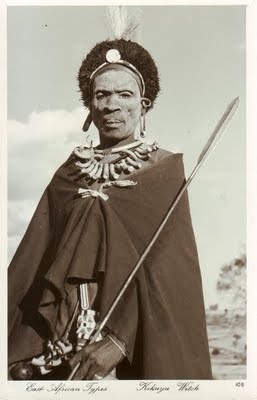 This very fine portrait of a Kikuyu traditional doctor in Kenya, East Africa - a "Kikuyu Witch", as he is described here - was taken by S. Skulina, a commercial photographer working in Kenya during the 1950s. The real photo postcard was issued by Pegas Studio, Nairobi as part of the series "Africa in Pictures" and is in almost mint, uncirculated condition.

The role of witch doctor was one of great importance in the administration of Kikuyu clans and he was one of the key figures in the council of elders. The Kikuyu still remain the largest ethnic group in Kenya to this day.