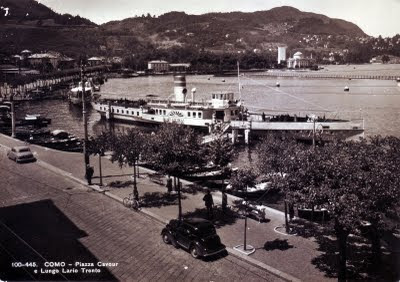 Collecting postcards that focus on modes of transportation is a very popular sub-genre of deltiology, with some collectors concentrating specifically on particular modes of travel such as planes, trains and automobiles...or as in this example, boats or ships.

This 1950 real photograph postcard features the Italian paddle steamer Patria, which together with its sister ship Concordia, was one of the last paddle steamers to sail on Lake Como. Whilst Concordia is still in operation, Patria was taken out of service in 1990 for major repairs and has been the centre of a passionate campaign for its preservation and restoration ever since. Originally launched with the names Savoia (the name of the Italian royal household) and 28 Ottobre (which celebrated Mussolini's March on Rome) at the Dervio dockyard on 31 July, 1926 and 2 November 2, 1926 respectively, the twin steamers were eventually renamed Patria (fatherland) and Concordia (concord) at the end of 1943 when fascism finally fell.

The postcard was issued by local Como publisher Brunner & C., a company that had been founded in Zurich in 1870, where it had pioneered the photo-type printing method. However, this patented method required lots of sunlight, hence the move to sunnier Italy!

Evelyn Yvonne Theriault said…
I spent my honeymoon on Lake Como (and surrounding lakes). I'm not sure but the roundish building in the back might be the museum dedicated to Alessandro Volta.
Thanks for the memories,
Evelyn in Montreal
October 4, 2009 at 1:46 PM