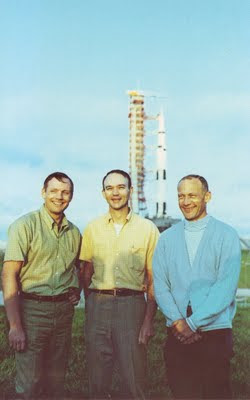 I couldn't let the month of July go by without posting something to commemorate the moon landing forty years ago. However, instead of the usual lunar images and space-suited astronauts I thought I'd share instead this uncirculated 1969 souvenir postcard from the John F. Kennedy Space Center of the crew of Apollo 11 in their civilian clothing. Neil Armstrong, Michael Collins and Buzz Aldrin are pictured smiling in front of the launch pad and the Saturn V space rocket that would take them into space.

This chrome printed postcard was produced by NASA Tours (conducted by TWA), is numbered 114498 and is in pristine condition.
Events People Space Uncirculated
First published on July 28, 2009 by LiT Web Studio