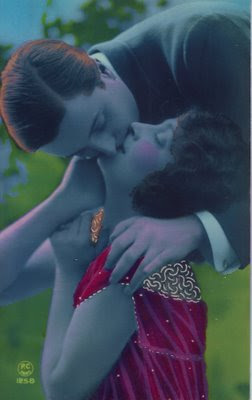 It was love at first sight for me and this superb hand-tinted real photograph postcard issued by P-C of Paris, France (active during the 1920s). As was common in this period the colours are far from realistic and instead are used for expressive purposes with the lovers depicted in what was then a popular shade of blue. The white detailing on the woman's dress has been applied with thicker paint so that the surface is slightly raised.

The card is uncirculated and has a divided postcard back, which is entirely covered with a romantic message in French written in very neat handwriting, dated 10 September, 1924.
Hand-tinted People Real Photograph
First published on July 15, 2009 by LiT Web Studio