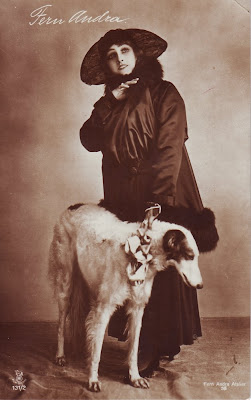 This sepia real photograph portrait postcard features the actress Fern Andra (1893 - 1974), darling of the silent screen and later film director. As was often the case the photographer is uncredited, with only the studio - Fern Andra Atelier - named.

The postcard was issued by the German company Rotophot (later Ross Verlag) as part of a series of postcards devoted entirely to movie star portraits, known as Film Sterne. Their distinctive emblem is printed in the bottom left hand corner of the card - RPH letters in a circle with a horse above and Film Sterne (Film Stars) below.

Although it is uncirculated there are a few clues that help in dating this postcard such as an NBC logo printed in red in the space for the stamp on the reverse of the card. The NBC or Neue Bromsilber Convention was a cartel of postcard publishers created in 1909 to reach an agreement on the pricing of postcards in an effort to be more competitive against publishers who were damaging the market by severely undercutting prices. This cartel was still in existence up to the early 1930s. The Film Sterne portrait cards were also numbered rather oddly and started with #61 and ran through to #225, with numbers up to 200 issued approximately between 1925 and 1935. This card is numbered 131/2.