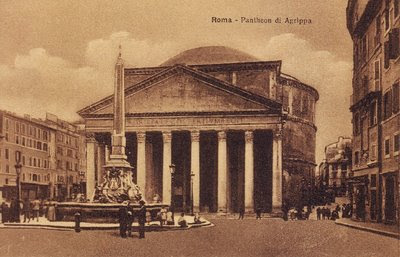 This uncirculated postcard features a sepia tint photograph of one of my favourite monuments in Rome – The Pantheon. It was issued between 1915 and 1920 by the printer Alterocca - Terni

identifiable by a simple name on the reverse of the postcard; the company would not use a logo until the 1940s. The company was created in 1877 by a primary school headmaster by the name of Virgilio Alterocca (Terni 1853-1910) . It started life as a small print shop yet became one Italy's most important postcard producers with clients from all over the world and with an annual output of 50 million postcards during the 1930s!

The advent of colour printing saw the steady decline and eventual closure of Alterocca although in 1995 the Alterocca Photographic Archive of over a million images was acquired by Alterocca Media.