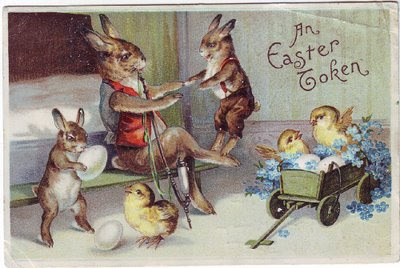 Apologies for posting such an unseasonal item but I recently came across this vintage embossed Easter greetings postcard at a market and it was love at first sight!

Siegmund Hildesheimer opened as publisher of books in 1830 and started printing Christmas cards in Manchester in 1876. The business extended to London in 1881 where they produced postcards on numerous subjects until 1920.

Anonymous said…
Hi,
do you know some shops in london where I can buy vintage postcards?
Thanks for your anwser.
A
April 25, 2009 at 1:08 PM

Vintage Postcard Gallery said…
Hi! I'm actually based in Italy and buy my postcards predominantly from markets and postcard fairs in Rome. Sorry not to be able to help more!
April 25, 2009 at 1:17 PM