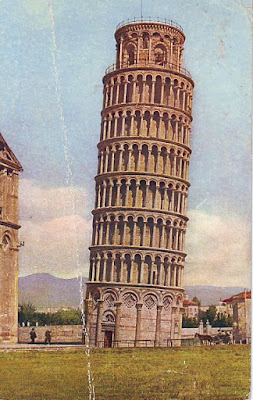 I've lived in Italy since 1994 so it seemed appropriate that I add an Italian vintage postcard to this gallery! This image is of one of the country's most famous landmarks - the leaning tower of Pisa - which is in fact the freestanding bell tower of Pisa cathedral in Tuscany.

The tower was built in three stages over a protracted period of about 177 years with work on the first floor beginning in 1173. By the time works had reached the third floor in 1178, however, the tower had already begun to sink!

It was officially declared a UNESCO World Heritage Site in 1987.