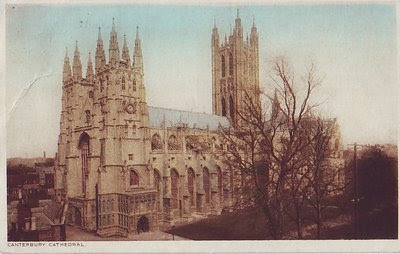 This lovely postcard of Canterbury Cathedral was posted in 1923. This UNESCO World Heritage Site is the church of the head of the Church of England, the Archbishop of Canterbury.

It is also famous the world over because of its associations with the martyrdom of Thomas Becket who was murdered in the north-east transept on Tuesday 29 December 1170 by over zealous knights of King Henry II who had taken the king's exasperated cry of Who will rid me of this turbulent priest? rather literally. The pilgrims in Geoffrey Chaucer's The Canterbury Tales are heading for his tomb.

Architecture
First published on May 06, 2008 by LiT Web Studio